Some Thoughts on the Broad Spectrum of Racism

I've never shied away from my particular resentment of Southern racism. Cloaked in tradition and gentility, years of barbarity and terrorism are blithely ignored as the Southern gentlemen and their darling belles get misty when they hear 'Dixie.' It's enough to make me reach for blood pressure medication. But that doesn't mean that it's the only kind of racism, or the most important.

Racism isn't geographically isolated, nor is it confined to a particular political or ideological affiliations. Boston, for example, famously resisted bused integration in the 1970s, resulting in this Pultizer prize winning photograph: 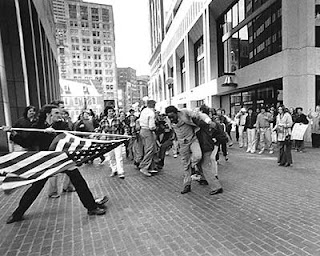 Today, Boston remains one of the most segregated cities in the United States. Don't let the 'enlightened Northeastern liberal' reputation fool you. (see also Twitter reaction to the Bruins' elimination from last year's Stanley Cup Playoffs on the goal by a black man) Racism, in its individual and collective forms, is still ubiquitous.

Progressives tend to focus on racism in systems, often referred to as "institutional racism." Conservatives and libertarians tend to be skeptical of allegations of entrenched racism, seeming to believe that racism can only exist on an individual level, and that to the extent it exists in the United States, it's not pernicious enough to require laws to combat it because "Jim Crow is over."

Neither political side quite seems to get it.


Not too long ago, I met a former police officer who used to work SWAT in a large Western metropolitan area. We were sitting in a bar with a mutual friend. Our mutual friend mentioned I was working on a paper on police corruption and the Drug War. (It's currently in the editing process, if you're curious.) I mentioned that one of the themes that kept recurring in my research was that drug cops tend to skirt rules and how this violated Fourth Amendment rights, most often against minorities, and how individuals should always refuse a search. The ex-officer looked around and asked (paraphrasing), "Are there any African Americans around?"

One of my issues with political correctness has always been that changing the language doesn't really change intent, and his inflected use of "African Americans" dripped with every bit of emnity and malice of "nigger." Nigger was the word, before my friend explained my heritage to him, he wanted to use to explain that he'd probably rough any one of them up who dared refuse and search them anyway. If they didn't have drugs on them? Oh well.

He assured me, however, that all dirty cops get caught eventually. Hm.

This is why addressing both individual racism and institutional racism are important. It is important to shame Paula Deen for creating a hostile work environment and being a generally disgusting racist person. Although not a police officer, she had power and authority in the workplace and some of those people will go on to other careers, where they might have power to discriminate against or abuse minorities themselves. Maybe they'll be real estate agents that will steer blacks out of certain neighborhoods; maybe they'll be bank officers that won't approve a loan to Hispanics; or maybe they'll be judges or jurors who have to hear a case in which a police officer is being tried for racist brutality; maybe they'll be CIA operatives spying on Muslims in New York City.

This isn't to say all institutional racism is as obvious as racist people in positions of power, or even conscious actors. I think many of the systems that inflict the most harm on black people and other minorities, such as the criminal justice system, are set up by well-intentioned people. The 100:1 crack to powder sentencing disparity was designed by well-meaning liberals and approved by the Congressional Black Caucus. It wasn't meant to be racist, it just happened to be devastating to black communities in outcome. And, to borrow a phrase from discrimination law, this "disparate impact" is as important to recognize as harmful, without necessarily assuming a conscious, racist agency behind it. Calling something "racist" implies agency and intent, where none may be present, and thus further muddles any discussion on what exactly racism is. (And, of course, what to do about it.)

Racism, as a term, has become over broad.* It encompasses everything from a clutched purse to chattel slavery. The spectrum in between these are often historically or socially related, but doesn't inform us on how to address any given issue falling on it.

There are individual racists and there are institutions that, over time, disproportionately inflict harm upon racial minorities. Both should be recognized, and both should be confronted. Sometimes individual acts, like product boycotts and social media outrage, are appropriate. Other times, change in public policy--such as scaling back or ending the Drug War--is more appropriate. But, pace some critics of my Deen post, individual racism isn't any less important than "real" institutional racism. Tolerance of individual racism feeds institutional racism and encourages discrete discrimination in every day life. That Paula Deen's personal racism gets more attention than illegal profiling by the NYPD and the CIA is in many ways unfortunate, but that doesn't make her less culpable for her own actions.

*I've often thought about really fleshing out the terms to best to distinguish various manifestations of 'racism,' but that's beyond the scope of this post.

Northern racism is far worse than Southern racism ever was. First, it is a particularly insidious form, since it isn't readily noticeable, if you're not looking to admit racism exists in the North. Second, it's most lethal form is known as "defacto segregation," whereby many Northerners use one excuse or another to avoid acknowledging they even have "racial" issues. Charter schools offer one example these folks use to avoid sending their children to intergrated schools. Gated communities are established for "better protection," but not necessarily protection from criminal activity, but protection from having to live next door to members of races not wanted as neighbors. Actually, racism is much more prevalent outside the South, than in the South.