What Fresh Hell is This?

It is incidents like this that make me so glad for the internet. When poor black people complain about abuse, the charges often dismissed in people minds before they even reach a courtroom (if they ever get there at all) because of the strength of the thin blue line and the nearly reflexive dismissal of their complaints. But people who know their rights, who can articulate them, and have the wherewithal to get their stories out via technology or other media can shine a light on the police abuses around the nation. And no, I'm not implying that white people are in a better position to do this:I'm saying so explicitly.

Cops push over, intimidate, and rough up black people--and other minorities (including poor whites, I'm sure)--all the time. I'm not saying all cops and I'm not even saying most cops. But I will say that a lot of police cover for these few bad ones on a pretty regular basis. People don't take poor blacks as seriously for a number of reasons:

1) Widespread lack of decent education. I can say with confidence that most people who grow up in high crime neighborhoods--whether law abiding or "criminal"--know the legal limits of what cops can do to you, on paper. It's not a perfect system, mind you (the understanding of entrapment is usually exaggerated, but I digress), but I would bet that a black kid walking down the street in any given urban area knows more about how the criminal justice game is played than your average 16 year old suburban white boy. I say all this to illustrate that it's not simply "knowing your rights"--it's the proper education that allows someone to articulate coherently and believably to the public-at-large that the police have gone too far. Poorly educated people who can't express themselves well will not be paid attention to.

2) Latent prejudice. Due very much to the problems associated with #1--poor diction, excited recount of events that are reinforce the stereotype of loud, emotional black people, etc.--people will take the word of an upstanding, well-spoken police officer over your typical ghetto product any day of the week and twice on Sunday. The effect of racial or class-based stereotypes will immediately disadvantage those most likely to be affected by police abuse.

3) Legal circumstance. Any victim of police brutality/abuse, particularly in the 'hood, will very possibly be guilty of some legal violation, or have a prior history of violations. The justness of a drug law, for example, is rarely questioned, nor is a past plea-bargained conviction on some unrelated charge often given thoughtful consideration when allegations of police abuse come up. More often, any past convictions or current predicament somehow excuse the police going above and beyond their charged duty and--more to the point--above and beyond the law when interrogating suspects.

4) Al Sharpton/Tawana Brawley, etc. Like women who cry rape to get back at an ex-lover who spurned them cast doubt on real rape victims, past actions of charlatans, hustlers, liars, and media whores in the black community who yell "racism" haunt all blacks who go public with allegations of wrong doing. It isn't fair that when white people lie to get out of something--e.g. when they blame anonymous black people for carjacking them or mugging them--they aren't racially typecast, but black people are.

5) "The Race Card." Mark Fuhrman's racist comments, to some people's thinking, cost the L.A. District Attorney's office O.J.'s conviction for murder. This may be true, to some extent, but that was crafty legal work--certainly not the rule in police department-black community relations. Yet, any time the "R" word is thrown around, white people circle their wagons and whine about "the race card" all day long. And, thanks to #4, they have a point sometimes.

6) Intimidation. Cops protect their own, and can be retaliatory against charges which get their comrades in trouble. Everyone in this country knows what happens when a cop-killer is on the loose: whomever is deemed responsible is going to be apprehended in short order come hell or high-water, and very possibly with a tag on his toe. It doesn't take any stretch of imagination to realize that when someone makes allegations against one of the fraternal boys in blue that could cost him his job, pension, and reputation, that a certain amount of retaliation may be expected within those highly-patrolled, high-crime neighborhoods.


I'm glad that a story of a (presumably) squeaky-clean white baptist minister is out to bring light to abusive officers--if we assume it's true. (There is no confirmation on the story I can find yet) I just hope he's got no terrible skeletons in his closet (e.g., militia organizations/fringe Minutemen, racist, etc.) because, if he does, the officers' lawyers will eat him for lunch--in spite of what appears to be a detailed and legitimate complaint.

Of note: I found this recent article in the Trib when I was digging around for this post. The article concentrates on the impact on the Hispanic community, but I found this to support my arguments as they relate to blacks and police brutality:

About 61 percent of Hispanics said they had a great deal or a fair amount of confidence that police in their communities will do a good job enforcing the law, compared with 78 percent of whites and 55 percent of blacks.

But only 46 percent of Hispanics said they were confident that police would not use excessive force on suspects, compared with 73 percent of whites and 38 percent of blacks. (emphasis mine)

So while 55% of blacks believe that the police enforce the law well in their neighborhood, just over 1/3 are confident that excessive force won't be used. The impact of that disparity--and the glaring disparity with the white perception of police--cannot be overstated when contemplating the future of criminal justice policy in this country.

UPDATE: Local AZ CBS affiliate covered the story here. I've read elsewhere that the alleged victim may be a little kooky. This isn't terribly surprising--most people just take the cops' B.S. and consent to the search. You almost have to be crazy to stand up for yourself in instances such as this. I'll keep an eye on the case as it develops.
Posted by JPB at 12:53 PM 1 comment:

Via Daily Dish
Posted by JPB at 3:01 PM No comments: 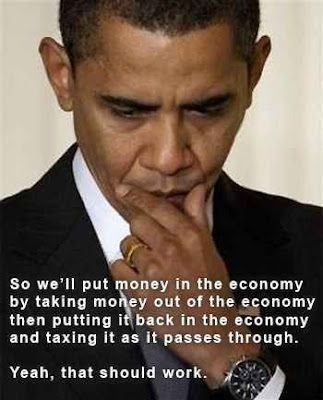 Ok. I hate reality shows. I watched the first two seasons of 'The Real World,' and that's about it--oh, and I did watch the first season of The Osbournes. I've never watched 'American Idol' or any of that mess.

So, it's taken me some time to finally click on the pic and news story of this 40-something Scot who'd never been kissed on 'Britain's Got Talent' that has been just about everywhere I look. But once it made the Washington Post, I relented and thought "Ok. Fine. I give up. Let's see how good this woman really is."

Damn. I love Les Misérables, so this was particularly touching. If you're a fan of music at all, you should watch. (Sorry, it's not embeddable)
Posted by JPB at 10:18 AM No comments:

It turns out, I may be a terrorist: 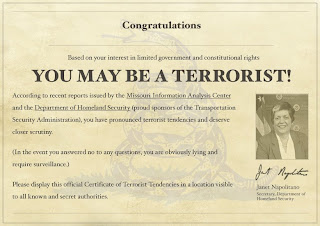 Do I really think the government is going to go all McCarthy-era/J. Edgar Hoover-style surveillance on all of us limited government/federalist types? No.

But, seriously, these idiots need to clean up their language when they are dealing with statements like this because abuse does, in fact, happen and pronouncements such as this give legal cover to those who go too far. It's hard enough to discipline law enforcement for breaking the law--irresponsible nonsense like this makes it that much harder.

Take reason's "Are you a terrorist?" test here. Headline reference here. (Sorry, no vid available)
Posted by JPB at 1:19 PM No comments: