Get Used to More of This

I've already documented cases of racism rearing its ugly head in this campaign, but as the election draws closer, it is predictably amplifying:

And in my adopted home state, this loveliness (click on image for clarity): 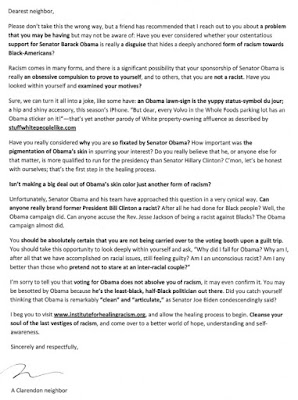 It's people like this that make me fear for Obama's safety. I always thought that the first black president would have to be a Republican, and even then, he wouldn't be safe. I fear for my country.

The Science of Race

Over at reason, Ron Bailey notes a recent psychological study which asserts that whites are uncomfortable talking about race and that, in turn, makes them appear "racist" to black peers.

I know Ron is a decent guy and doesn't mean anything by posting what he did and agreeing with the findings; nor do I assume that the researchers had anything but good intentions in going through with the study. Nevertheless, I can't help but feel annoyance with studies like this and the very predictable reactions to them. I don't appreciate analyzing every aspect of human behavior--particularly as it pertains to the social construct known as "race"--as if there is a) some sort of universal (or nearly so) "black" behavior or perception that can be broken down in an artificially controlled environment; b) any evidence that whatever pool they used was indeed representative of black people generally; c) anything of consequence, save new tools for an even more insulting "diversity" workshop, that will come of this. Science is a uniquely valuable tool for humans to understand the world around them--but social "science" such as this is strictly masturbatory mind fodder for panels, papers, and faculty room discussions. (And, of course, the inescapably ignorant, often insulting, yet rarely provocative comment pages of libertarian blogs.)

Let's assume that this study is correct: white people don't want (read: are afraid) to be seen as racist, but nevertheless appear so as they tiptoe around the race issue. This is not surprising, given that black people tend to be (quite understandably) more sensitive to racial bias, discrimination, and prejudice. Yet, what qualifies as each of these varies from region to region and even--gasp!--person to person. (You'd think libertarians, of all people, could distinguish between individuals and assigned collective characterizations, but I digress.)

Some people say "black." Older folks say "colored." The ubiquitous term today is "African-American"--though you rarely see that on this forum for reasons I'll get into at another time. "Negro" and "Afro-American" were used interchangeably (at least, where I went to school) when I was growing up in the 80s. It is not at all surprising, then, that a lot of whites are hesitant to bring up race: many have had their heads bitten off by some well-meaning but less-than-compassionate brotha or sista who got offended when they called them "black." (Which is usually followed up by the innocent but very poorly worded question: "Then what are you people supposed to be called?")

This speaks to a larger problem as we tackle race relations in America: so many of us want blackness to be recognized and celebrated but still hold onto this Utopian "ideal" of a "colorblind" society. These ideas, of course, cannot coexist--let alone the fact that most black people look very different from your typical white person (this author notwithstanding) and such well-intended drivel crashes horribly when one contemplates reality. So many of the PC set just want to wish such inconvenient (for their purposes) differences like pigment and hair texture away for the sake of some unattainable and self-delusional harmony.

Put simply, if white people want to know how to deal with black people, they should talk to black people. In doing so, however, it should be with the explicit understanding that not one of us can speak for the rest of the race. Because, frankly, thinking like that often gets you people into trouble later.
Posted by JPB at 2:45 PM 1 comment:

As I wrote when I started MMM, often the songs have less to do with my mood and just happen to be songs I enjoy. Fittingly, while I am still in the afterglow of a weekend spent with some friends I have barely seen in the better part of a decade, I was listening to Pandora this morning and this song came on. Hope you enjoy it as much as I do: