"Black, white, yellow, green, or brown— we can all be callously summed up in a trite statement of unity."

The people of America need to put aside their differences and come together on common ground. Especially at this crucial moment in our history. How better, I ask, to achieve this goal than to engage in an inconclusive, protracted, ignorant, and superficial examination of the issue of race?

The time for vagueness is now.

Over the past 20 years, our country has become intensely polarized. The gap between rich and poor has grown ever more vast. Voters on both sides are desperate for alternatives. If we ever hope to move into a new era of enlightened multicultural exchange, we must foster, on a national scale, a second-grade-level look into the most painful and difficult issue in America's cultural history.

Black, white, yellow, green, or brown— we can all be callously summed up in a trite statement of unity.

Like it or not, the U.S. needs a stupid conversation on the issue of race relations. Perhaps more importantly, we need this stupid dialogue to be couched in the most self-righteous, know-it-all attitudes on the part of those involved, as if they have no idea whatsoever of how much more complicated the issue is, and how little their one-dimensional approach to it brings to the table.

It's our duty to put aside the complexities of cross-cultural communication and focus on the first idea that comes to mind. Then, after we've wasted 20 minutes discussing whether the term black is offensive, we can repeat the first idea over and over until we have alienated all listeners who did not already agree with us at the beginning.

Is that so very hard?

The time has come to start saying foolish, foolish things about the O.J. trial once again.

It's been too long since we sat down and shared long-discredited arguments about welfare mothers eating steak with each other. Terms like "reverse discrimination" should be put back in the spotlight. And while we're being open and honest, why not trot out that old chestnut about the unfairness of black-only usage of "the N-word."

I dare one of our presidential candidates to blanket the media with buzzwords like "Americanism," without ever examining the underlying implications of what they might mean. That would be the day.

Liberals and conservatives alike, hear my plea: We can all say incredibly silly things about who does or does not have the "right" to "act" either black or white, or both.

The Information Age has opened the gates to free and unfettered communication. If we take advantage of that incredible opportunity and technology, we could, in theory, get every single political comment posted on the Internet to relate an embarrassingly simple-minded opinion on some aspect of race in America. We could have every political video clip greeted with literally hundreds of foolish and inane comments from citizens who appear never to have thought about the issue of race beyond their first naïve presumptions, or caricatures they've seen in the media. We could generate blogs—not just hundreds, not just thousands, but hundreds of thousands of blogs—all saying one version or other of the same basic three to five ill-informed viewpoints on this nuanced cultural issue.

Imagine it, if you can!

Since the civil rights movement, race has been our nation's "dirty little secret"—an ugly, shameful reality swept under the rug of polite discourse, emerging only in isolated, angry outbursts about airport profiling, police brutality cases, and gangsta rap. Let's take that issue out from under the rug—keeping that initial phase of ignorance, lack of mutual understanding, and fear—and make sure it dominates American politics for the next century.

Only by opening an embarrassingly one- dimensional dialogue on the most simple and wholly ignorant level can we ensure that we, as a nation, never get down to the deeper issues about race and identity that truly threaten to tear this country apart.

I am such a minority I’m nearly an anomaly: I am an undecided black voter. According to the ABCNews/Washington Post Poll from August 22, 95% of registered black voters have made up their minds—with 88% supporting Sen. Barack Obama.
Neither of the major party presidential candidates holds much appeal for me, but as a black man, there is an undeniably strong urge to vote for the first black president of the , in spite of my misgivings about his policies. While “Yes We Can” is nothing more than a catchphrase, Obama’s ascension to the presidency would demonstrate to black youths a tangible accomplishment of what they can do is hard to overstate.
I grew up in and went to the first magnet elementary school in the city. But, due to my family moving a few blocks out of the city school district, I was removed from the program and started a new school in the 4th grade. My new school lagged far behind academically and was much less diverse. Whereas my old school had an array of ethnic, cultural, and religious students, my new school was dominated by two very distinct groups: white kids and black kids.
Up to that point of my life, my concept of race was virtually non-existent. That suddenly changed because race was a polarizing factor in my school and neighborhood. Looking back, the most poignant of many experiences was the one time a black classmate asked told me “Wow! You’re the smartest kid in the school!”
Not knowing the difference between education and intelligence, I shrugged and agreed.
And then he said, “And you’re black! That is so cool!”
Such an observation seems innocuous when taken out of context. But over time, I realized that this statement was indicative of how many black students—even by the age of nine—assume a position of (at least, intellectual) inferiority to their white peers. It doesn’t take a sociologist to realize that if a kid doesn’t think he’s as good as someone else—for reasons beyond his control—the odds of that kid succeeding are lessened dramatically.
A black president, while not a cure-all by any stretch of the imagination, could help alleviate the presumption of self-doubt.
But would the net gain in collective self-esteem really offset the potential economic costs of an Obama presidency?
Senator Obama’s views on trade are murky, at best. If he decides to enforce “environmental standards”—i.e., a tax via treaty—consumer prices will rise to the detriment of all, but specifically poorer, Americans. His pronouncements to tax “windfall” profits of oil companies will indeed raise gas prices, thus putting further economic burden on the poor. And for healthcare? Well, while his “voluntary” plan looks better than Hillary Clinton’s mandatory plan on its face (remember that the federal income tax is also “voluntary”)—the results of existing Medicaid-type programs are hardly exemplary and, indeed, sometimes tragic.
But it isn’t as if the alternative is any better. Senator John McCain is a graduate of a service academy, a decorated war veteran, a self-described “maverick,” and has an aggressive foreign policy—all of which, some think, make him qualified to be president. Yet, all the same could be said of George Armstrong Custer—and we all know how well that turned out.
So, I can pick a candidate that fills people—and specifically black people, my people—with a sense of pride as he simultaneously makes us poorer and less likely to overcome the substantial obstacles in the way; or I can pick one that may possibly send young people into bloody confrontations with the reemerging powers of the world at a cost of blood and treasure not yet calculable.
I think I’ll just flip a coin-- Heads: they win; Tails: we lose.
Posted by JPB at 8:30 PM No comments:

Yes, Michael Phelps was amazing. Yes, our gymnasts were stellar. Yes, all of our medalists --and other participants--are important and should be commended.

But there was one, and only one, gold medal I cared about... 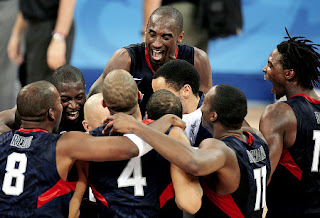 And they earned it. Congratulations to the "Redeem Team" for sticking together, playing hard, and representing our country proudly and honorably--oh yeah, and that lovely new bling: 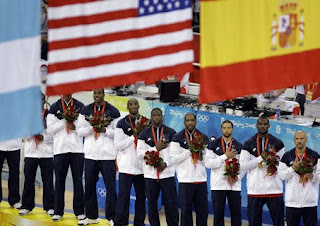 Yeah, I know I've been slacking recently. Sorry. Been busy at work.

I picked three songs I want to play for MMM, and they are ALL owned by Universal Music Group (meaning I can't embed them to put them up for your enjoyment.)

So, here's one from my YouTube stash that I hope you enjoy: