Although I had said that I was going to change the focus of this blog to more criminal justice issues, I haven't really done so to date, save adding the tagline "bellum medicamenti delenda est" to most of my blogposts. This is just crude Latin for "The Drug War Must End."

I have, however, focused my reading to more criminal justice and drug war issues. One of the blogs I read is El Blog Del Narco, a Spanish language blog that chronicles the drug war in Mexico--which, of course, is just America's drug war exported.

The blog is run anonymously, as one would expect when dealing with people who murder en masse with impunity. And not just simple murder: they make a spectacle of it. [N.B.: gruesome details of murders follow. Most links NSFW. ]

Take for example the latest entry: It's entitled "Fotos de ocho ejecutados en cd mante" which translates to "Pictures of Eight Beheaded [people] in Ciudad Mante, Tamaulipas."  The pics are as gruesome as they sound, yet having followed this blog for several weeks now, I can tell you it's not shocking to me anymore.

The heads are laid out, eyes closed--some blindfolded--on the opened tailgate of a pickup truck. The bodies of the victims are laid out behind them in the flatbed, with the gaping wounds, left behind by the blades that severed the heads, pointed outward. Underneath the heads is a banner--which often accompany these murders--that reads, very roughly*, "This is what happens when you work for the Zetas. Here are your dirty fucking hawks. Sincerely, the Gulf Cartel."

Other posts this week have included, inter alia, pictures of a group of men going down to authorities Bonnie and Clyde style, video of an ultimately successful but botched two-man hit on one man in what appears to be the entrance to a shopping mall, photo of one guy wearing beachwear in Acapulco shot 14 times at close range--with a three shot coup de grâce--a mass grave in Acapulco that contained 18 bodies, a story of two informants killed in the same clothes in which they made their statements to police, and a video of an interrogation and beheading of another man confessing to working for another dealer. This is in addition to recent photos of a woman decapitated and put on display with her severed head between her legs and several people strung up on an overpass--both with banners explaining their murders.

Since January of 2007, there have been an estimated 28,228 drug-war related deaths in Mexico. Notice they are not drug-related-- they drug-war related. Our prohibitionist policy, exported around the globe via treaty and trade agreements, has cost countless lives in our country and around the world. El Blog Del Narco is a remarkable source that brings home the unspeakable brutality of the consequences of our misguided moralist policy. That Proposition 19 went down to defeat Tuesday because people are afraid of the consequences of legalization would be laughable if it were not enabling further this ongoing tragedy.

This is Mexico on America's War on Drugs. Any questions?

*I can't speak Spanish, and only can read it on a very basic level thanks to my fading acquaintance with Latin. I used the site's auto-translate and asked my wonderful girlfriend, Dara, to fill in the gaps.
Posted by JPB at 12:13 PM No comments:

What, there's a difference?

A funny website I just found about one of the pains of owning an iPhone: Damn You, Auto Correct. 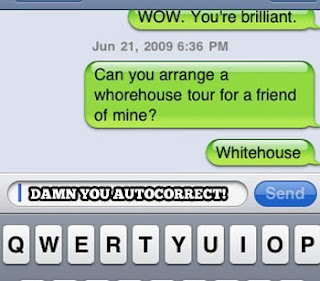 Change: Ur Doin It Wrong

No, I'm not talking about Obama.

Even in last night's anti-incumbent "bloodbath," House incumbents had an 87% survival rate, roughly. That anyone thinks last night was a radical shift in our government is a damning indictment of the intelligence of the electorate and demonstrates an expectation to protect our professional liars class.

And these people are scared of "corporate money"--what the hell is it going to do? Knock the incumbency rate down to 84%?

bellum medicamenti delenda est.
Posted by JPB at 10:40 AM No comments:

Unsurprisingly, a lot of organizations went to the Restore Sanity rally in DC this past weekend and brought along video cameras--just as many people who came to the Tea Party rallies did. Even less surprisingly, they found a bunch of idiots...just like they did at the Tea Party rallies. In large groups of people, of any political or other persuasion, idiots are always in abundance.

Anyway, some vids are funnier than others. This vid was done by folks at the Second City Network:

After I posted it on my facebook page, my friend Libby put it up on hers with a note saying, with other similarly unflattering commentary, "There is no [gosh darn] country named "Keynesia."

Which got me thinking: there should be some sort of economics fable with a land called Keynesia. Or maybe a limerick:


There once was a land called Keynesia,
where all in the land had amnesia,
they spent all their money,
and wasn't it funny,
that nobody knows where it went?

I've decided to post some random musings for get-to-know-your-blogger purposes, but this is not a "link round up." There may be links, but usually it will be to clarify the comment for those who don't happen to know to what I am referring. Also, I don't plan on making this a daily thing because sometimes I don't have anything worthwhile to share with you and I don't want to force it.

Yes, for reasons I've explained before, I'm voting today. The Voting Rights Act passed in 1965...when my dad was 37 years old. (Call me sentimental.) Oh, and if someone posts pics of me from later tonight smiling, that's not joy--that's just deep-seated schadenfreude.

Congrats to the Giants on winning the World Series. As the champagne corks popped in San Fran, I'm sure Brian Cashman was on the phone with Cliff Lee's agent expressing his heartfelt condolences as Pink Floyd's "Money" was playing in the background. [insert evil laughter here.]

Say what you will about Donovan McNabb, on no planet and in no parallel universe is benching him for Rex Grossman a reasonable decision. I'm sure many Chicagoans were rushed to emergency rooms after falling off bar stools and laughing uncontrollably after seeing the substitution...and then the hit...and then the fumble...and then the touchdown.


bellum medicamenti delenda est.
Posted by JPB at 12:14 AM No comments: