Another Victim in the Steroid Witchhunt

Now, NFL stars are catching hell (surprising, I know. It's only a league of giants.):

A great post with a link to Dan LeBatard's piece at Agitator here.
Posted by JPB at 2:46 PM 1 comment:

Censorship requires government coercion limiting one's right to Free Speech. This was just a "diss" from a friend of mine on facebook.

This friend posted a link about a certain topic which has dominated many a blog in recent weeks, including this one, and I commented on it. I criticized the post for being, at times, absurd and pointed out that it comes from an organization that is prone to ad hominem attacks -- not few of which are directed at people I know, have worked for, or currently am affliliated with. (Oddly enough, she has much the same relationship with the attacked that I do, but I digress.)

Why is it that some topics are off limits to criticism?

I openly accept any and all comments on this blog, on facebook, or anywhere else where I attach my name -- save anything hateful. (e.g., overtly racist. That is the only reason I have a filter on my comments here.)

Stifling debate is an affront to the marketplace of ideas. As a private actor, she had a right to do it. I just don't understand why.
Posted by JPB at 12:56 PM No comments:

900 Wins for the General 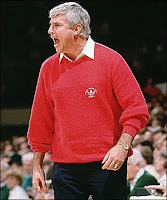 Anyone who knows me does not have to be told how I feel about Coach, what happened to him at my alma mater, or where former IU president Myles Brand can stick his position at the NCAA.

Way to go Coach! Go Red Raiders! Go Hoosiers!
Posted by JPB at 9:28 AM No comments:

What libertarians should do after the Ron Paul Newsletters

In the wake of the racially divisive “revelations” surrounding the Ron Paul rEVOLution, libertarians should reevaluate the methods by which they make themselves and, even more importantly, their ideas palatable both to the electorate as a whole and to black voters specifically.

Selling libertarianism as a brand to the general population is a difficult enough proposition. To attempt to sell it to African-Americans is to buck seventy years of political socialization. From FDR’s New Deal to LBJ’s signing of the Civil and Voting Rights Acts, the federal government has been viewed by many blacks as the guarantor of collective economic well-being and individual rights.

This view of government is complicated by the electoral shift and the courting of the Southern vote by the Republican Party, the traditional—if very strained—political allies of fiscal libertarians. Circumstances from Barry Goldwater’s vote against the Civil Rights Act to Ronald Reagan’s 1980 campaign kickoff in —a hotbed of racial tension— make a wholesale political shift of blacks to the right a pipe-dream. Yet, it does not follow that libertarians and the GOP should shirk black issues altogether.

Ron Paul’s most recent racial misstep is merely the latest in an always-growing list of offenses committed by the right. This is particularly problematic because of the groundswell of support Paul received, albeit of little electoral significance. The libertarian base of that support made the error usually reserved for supporters of more mainstream candidates — putting the man before the message. The general mistrust of politicians with a healthy and reliable contrarian approach to their more troublesome policies (e.g., Paul’s stance on immigration) were conspicuously absent around much of the rEVOLution. If libertarian activists wish to further the ideas of liberty, they must begin by abandoning this flawed “libertarian” campaign and re-embrace the ideas that, perhaps imperfect, can be debated without being compromised by the (glaring) faults of any single individual.

In the short term, this would serve as a public relations salve to African-Americans and a more racially sensitive general public. In the longer run, and more importantly, libertarian ideas will be separated from a marginalizing figure —to be heard by black people still looking for political answers to many problems. While the full package of libertarian ideas will not be accepted, certain topics would have special resonance among African-Americans and can gain traction:

1. War on Drugs. There is hardly an aspect of the ‘War on Drugs’ that doesn’t affect blacks disproportionately. From the extended criminal sentences on ‘crack’ cocaine, to the violence that invariably accompanies prohibition and the relative percentage of black men in prison, this policy has been nothing short of disastrous for black individuals and families across the country. The debate on the harshness and effects of the drug war ought to be hashed out not just in the marble halls and plush auditoriums within the beltway, but in the neighborhoods and churches suffering from virtual lockdown by gang violence and a rising police state. Where liberals and conservatives have failed in addressing these problems, libertarians are in the unique position as the voice of reason.

2. School Choice. The terrible state of American schools is no secret. Government at all levels is failing to provide adequate public education —and urban blacks often face the worst of circumstances. For example, while and are among the best public school systems in the country, Washington, D.C. schools rank 51st —dead last among all the states plus the District. The ability to opt out of local public schools to other regional or private schools would provide the education necessary for upward mobility and increased lifetime wealth across the younger generations in black neighborhoods. Libertarians have long been the champions of school choice in its various forms.

3. Eminent Domain. After the Kelo decision in 2005, property rights have been in greater jeopardy from private interests. Given that poorer and middle-class blacks live in segregated areas often with depressed property values —which make the land a prime target for developers— and that the property owners and renters will be less able to afford adequate counsel to defend against seizure, blacks are certainly among those whom face the greatest threat from eminent domain abuse. Eminent domain serves as an excellent example of how government, with the blessing of the “liberal” members of the Supreme Court, oversteps its constitutional bounds and invades the solemn rights of its citizens. Framing this argument properly could win solid allies among black property owners and the middle class.

These are but three examples of policies that libertarians can highlight to at least begin a political rapprochement with African-Americans. Such a move probably irritates more traditional libertarians whom prefer broad-based messages to the public. Yet, it only makes sense that if certain policies more directly affect a particular demographic (e.g., farm subsidies and farmers), libertarians should tailor these issues —which are not exclusively black issues— to the particular (and considerably larger) audience which can most benefit from libertarian reform.


The libertarian policy elites need to take this opportunity to reach out to black . Continuing to embrace Ron Paul in light of the newsletters will further marginalize an already weakened movement — ultimately impeding liberty for all Americans.