Alex Tabarrok makes some good points over at MR about the hysteria surrounding gay marriage:

Alex cites this piece by Stephanie Coontz in the NYT, where she notes:

By the 1920s, 38 states prohibited whites from marrying blacks, “mulattos,” Japanese, Chinese, Indians, “Mongolians,” “Malays” or Filipinos. Twelve states would not issue a marriage license if one partner was a drunk, an addict or a “mental defect.” Eighteen states set barriers to remarriage after divorce.

I am usually hesitant to compare black/race issues with gay issues because I think the two are too often mistakenly conflated -- most often citing "just like blacks used to be" or some similar exaggeration. In the marriage debate, however, I think the comparison is completely fair. It is equally asinine to think that there is a legitimate public interest in precluding the benefits of a marriage contract between consenting adults whether they are of different races or of the same sex.

The 'sanctity of marriage' argument is just bullshit in the shape of a cross.
Posted by JPB at 12:25 PM No comments:

Some encouraging news out of California:

The decision by a unanimous three-judge panel of the 4th District Court of Appeal to uphold a court order directing Garden Grove police to return marijuana seized from a properly certified patient is a welcome validation of the law approved by voters 11 years ago. Since it clarifies the duty of state and local law enforcement agencies – to uphold state law, not to ignore it and seek to enforce federal law – it should end the noxious and widespread practice of simply seizing medical marijuana from patients who are legally entitled to possess it.

Medical marijuana may provide an excellent catalyst to get more lefties to be respectful of federalism. The federal 'War on Drugs' is perhaps the best example to demonstrate that concentrating so much power in the federal government runs counter to the interests of personal liberty.
Posted by JPB at 12:01 PM No comments: 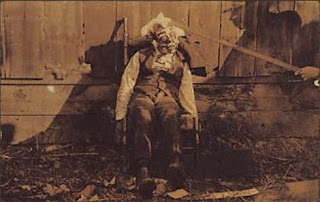 Over at the Daily Dish, Sullivan points out the history of torture in America. Like so many recently, he looks to the GOP to reconcile itself to its past...but I reiterate, its not just the GOP or even the South that needs to come to terms with the gruesome history of racism in America.
Posted by JPB at 9:52 AM No comments:

Yesterday in the Wall Street Journal, a disturbing -- although not surprising -- op-ed on the dumbing down of America's brightest students:

Ben, Alison and Lily, along with another few dozen who attend my afterschool writing program, also attend top-notch New York private schools that cost upwards of $25,000 a year. So why, one might wonder, do these kids need an extracurricular creative writing coach? The answer is simple, though twisted: Their schools -- while touting well-known athletic teams -- are offshoots of the "progressive education" movement and uphold a categorical belief that "thought competition" is treacherous.

One would like to think that retarding educational achievement would be somewhat "hush-hush," but no:

"We don't want kids to compete individually, put themselves in vulnerable positions as individuals," explains a leading administrator. "They can compete within teams," explains another. "So the focus is on community building rather than on personal value."

So, the idea is that we don't really want to kids to demonstrate how good they are at something, but how they can contribute to a mythical "whole" that would somehow distribute benefits collectively -- without yet reaching the level of Harrison Bergeron.

Honestly, I understand the motivation behind this: no one wants to make a less gifted kid feel bad. But, feeling bad is part of growing up. Once, as a teen, I really felt bad because I bought into this idea that we need to shelter kids from their own limitations. The following is not an exaggeration:

There was a "slow" kid in my journalism class I'll call Jimmy. He could barely write, in spite of being passed from one grade to the next. Jimmy genuinely had learning disabilities -- and they were almost painfully obvious if you met him -- but inclusion was the rule so write for the high school paper, he did.

As the editor-in-chief of that paper, I had to give assignments to Jimmy and try to decipher what in the hell he meant when he handed them in. I would try to fix it, but I usually had to just slap his name on something I wrote and seriously tone down my vocabulary to make it even slightly believable. (After a couple futile tries in getting him to write stories, I gave him more "Upcoming Events" type blurbs just to give him something to do and drastically cut my editing/rewriting time.)

So what made me feel bad?

Well, it was Senior Night and all the senior football players, cheerleaders, and band geeks (among whom were Jimmy and me) were brought down to the field with our parent(s) to be introduced. You know the spiel, a minor bio with future plans announced. "So and so will go to Indiana University to study..." blah blah blah.

Well, when Jimmy's name was called, it went something like this:

"Jimmy Dixon is a four year member of the marching band. He is escorted by his mom and dad Sheila and Donny Dixon. Next year, Jimmy plans to go to Hartford College to study journalism."

I changed the name of the school, but suffice it to say it wasn't a community college...and even then, our friend Jimmy would have absolutely no business there. I can say without a hint of intellectual arrogance or elitism that someone should have told Jimmy (more kindly) that he wasn't ever going to be a professional writer because he lacked the ability to even be a competent one.

His parents should have known better than to send him to a university. I can only imagine the pain he must have felt from what had to be a wrenching, albeit brief, college experience.

To have sent Jimmy - a small, weak, skinny kid - to NFL training camp would be deemed cruel and absurd, yet sending him to an academic environment for which he was equally unfit was the result of trying to spare him from the realization that his considerable limitations would actually limit him.

While Jimmy is an extreme case, the moral of the story remains the same. Students should be able to showcase their talents -- be they athletic or academic -- and capitalize on what they are good at. Those that aren't as good should undoubtedly aspire to get better, but understand that "All men are created equal" does not apply to outcomes. Hiding the truth during childhood only delays the inevitable.

It is not fair that Jimmy wasn't as smart as other kids. It was more unfair to let him think he was.
Posted by JPB at 5:07 PM No comments:

My friend Michael Moynihan has a good post over at H&R commenting on race riots in France:

A brother of one of the dead teenagers, Omar Sehhouli, said the rioting "was not violence but an expression of rage".

Reginald Denny wasn't beaten by violent thugs -- he was a victim of "rage expression."

And speaking of riots, Kevin DuBrow, lead singer of the 80s band Quiet Riot, was found dead today in his home.