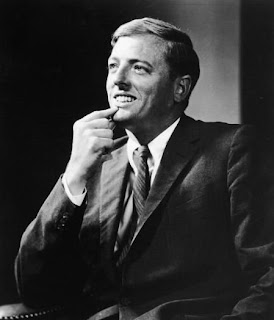 I am very saddened to hear of the passing of William F. Buckley, Jr. While I certainly had differences with his opinions on many issues, there is no man who had a greater impact on my ideology, personal politics, and the professional life I have chosen for myself.

Every time I hear the Obamas talk, I think of this spoof ad from SNL back in the day:

In my morning scan of the major U.S. newspapers, I found a paranoid rant in the L.A. Times reacting to the possibility of concealed-carry laws on college campuses:

Iam having a recurring nightmare.

It takes place in a lecture hall at Anywhere State College during a tedious presentation on the history of video games. The only alert person in the class, a straight-A student majoring in Wi-Fi, suddenly notices an unfamiliar male entering the room.

He is wearing a hooded sweat shirt because it is cold outside and the wind is blowing, but it makes him look like a convenience store crook. He is also carrying a backpack and begins to reach into it.

I know, because I am an observer in the nightmare, that the stranger is only going for his NRA Play Station "Blood in Space" to occupy his mind during the lecture by a professor whose topic that day is "Pacman, the Godfather." The subject is, like, yesterday, and hardly anyone is listening or even paying attention to the presence in the doorway.

But the alert Wi-Fi major in the sixth row, whom everyone knows by the nickname "Guns," is sure that the doorway figure fits the profile of a campus killer and isn't about to sit there and be murdered without a fight. Guns instantly draws his legal 9-millimeter Beretta and begins blasting away.

The gunfire arouses the instincts of others in the class, and they, similarly, draw their permit-allowed weapons ranging from handguns to shoulder-mounted rocket launchers and join the fun. One student throws a flash/stun grenade.

Obviously, the Al Martinez doesn't really think that kids will start toting grenade launchers to class -- but his point is no less ridiculous. Only a fool could honestly believe that legalizing concealed-carry at colleges and universities will turn 9 A.M. lectures into the OK Corral.

The idea of a room full of 19-year-olds packing 9's to Psych 101 just because the government says its legal is absurd on its face. Certainly, some will. But on the list of things college kids spend their loan money on, guns fall far behind illegal purchases of beer, drugs, liquor, and more beer.

A legitimate point could have been made -- allowing guns on a campus where frat parties happen could lead to all kinds of trouble. The combination of drunk people and firearms is my greatest concern with allowing guns on campus, and it is an issue that deserves serious attention.

However, Mr. Martinez decides to skip all legitimate concerns and just appeals to emotion:

This time I am taking my grandson to his kindergarten class at the behest of his mother, who has a doctor's appointment. As I am watching him run off happily into the play yard on School Street, I notice that another little boy has dropped his Roy Rogers lunch box.

It is red and yellow and has a picture of Rogers on the front mounted on Trigger, who is rearing. Rogers is waving his cowboy hat in the air the way he used to in all of those exciting 1950s westerns. I am intrigued by the lunch box because most kids today don't even know who Roy Rogers is, or was, much less Trigger, who is stuffed and mounted in a museum in Branson, Mo.

Then something equally significant catches my eye. In addition to the apple, carrot sticks and tofu sandwich that fall from the boy's lunch box, there is a snub-nosed .38-caliber revolver of the type I once carried as a backup weapon while a Marine fighting in the Korean War.

The gun in the lunch box? That doesn't surprise me because it is within the guidelines of a new state law that mandates the right of students from grades K-12 to carry firearms to school to protect themselves against kids with guns. (This is a nightmare, after all.) It is basically the same right that had been granted earlier to college students.

I awoke from the nightmare both pondering the possibilities and writhing from the very notion of kids with guns. But then I finally calmed down, comforted by the fact that it was only a bad dream and not a reality.

At least not yet.

Yes. That's right. Coming to a playground near you-- 5-year-olds packing heat, with government sanction, no less.

Email ThisBlogThis!Share to TwitterShare to FacebookShare to Pinterest
Labels: education, guns save lives

The following is excerpted from Ted Galen Carpenter's piece in the Middle East Times:

Major countries like Russia, India and China worry that their own restless ethnic or political minorities could seek to emulate Kosovo. Russia frets especially about Chechnya; India about Kashmir; and China about Xinjiang, Tibet and Taiwan. Beijing's uneasiness about the Kosovo precedent with respect to Taiwan was not eased when Taipei promptly congratulated the Kosovars and emphasized the United Nations' need to respect the principle of national self-determination, i.e., Taiwan's claim to sovereignty.

But there are potential secessionist arenas in Europe itself. Cyprus understandably opposes Kosovo's move, given the pretensions of the Turkish Republic of Northern Cyprus. Turkey, which set up the TRNC, has its own problems to worry about given the ongoing insurgency of Kurdish secessionists. Spain may one day be less than thrilled about Pristina's action if its own Basque separatists are encouraged to rev up their violent campaign. And London, which vied with Washington in its enthusiasm for Kosovo's independence, may have reason to rue that stance if Scotland decides on independence.

These are all hairy problems, and legitimate ones. I'm curious to know how libertarians balance the goal of autonomous self-rule versus the political reality of bloody, crushing resistance. Peaceful independent nations are very often born out of violent conflict. And while conflict should be avoided when at all possible, is it really always to be avoided*?

Perhaps the US recognition of Kosovo will provoke conflict (although I still don't know how US recognition after the fact would increase the risk of Serbia retaliating) and that I can see as troubling, but are we for self-rule for all people or just us?

*CLARIFICATION: I'm not trying to put words in Dr. Carpenter's mouth with this statement. It just seems that his argument in this case rests on the underlying premise of stability at all costs. I should have reworded the sentence.