How to Treat Kennedy's Death

My friend Elizabeth Nolan Brown had this to say about the way the American chattering and political classes are handling Ted Kennedy's death:

Maybe I’m just being falsely nostalgic, like when I wish ladies still wore hats and pretty stockings even though I can hardly be bothered to comb my hair and apply mascara on a daily basis; maybe it’s just, as the[LA Times] article goes on to point out, the “more elemental … difference between knowing someone as an individual rather than a political caricature” … but maybe it really is a sad, sad [indictment] of our current political culture and the kind of respect and diplomacy that’s been lost …

I found myself vacillating on how to treat Teddy in death because of my contempt for him while he was alive. Save one rather nasty tweet I wrote while somewhat intoxicated--that I subsequently deleted--I have been quite reserved in my public criticisms. The respect and diplomacy of which ENB writes I think is--like nearly any 'good ol' days'--indeed a 'false nostalgia' for things that never really were. But, nevertheless, I decided to hold my contempt for Teddy at bay, for the most part.

Most of my venom, instead, has been directed at the glowing obituaries that mention his most tragic act as nothing more than a political misstep for him--likening the death of a young woman to Gary Hart's pictures that cost him the nomination in 1984. That, I think, has been the most reckless part of this Kennedy media overdose.

But as this two-decade old profile in GQ illustrates, the man of the people wasn't really one of the people. Like the aristocratic politicians that counted plebes as their patrons in ancient Rome, the Kennedys' modern day Julio-Claudian mythology belies their personal, decadent, self-involved natures. The legendary personal "foibles"--as many are wont to use so-milquetoast of term--of the lot of the Kennedy men were stunts of such depraved indifference to other people that only those immune to laws of government and the judgment of society could survive politically. Yet, they are widely held to be "America's Royal Family," known for their empathy toward the downtrodden and helpless that could never approach them in their personal lives, lest they be molested on a restaurant table or hit in the face with a flying drink.

Obits like this one, penned by another friend of mine, J.P. Freire (who is, by the way, an unapologetic conservative), project a fragile humanity onto the man that,--while J.P.'s article was moving to read--I don't think was really there. Matt Yglesias, a proud "progressive", responding to some "right-of-center" rebukes this week for being confounded by modern politicians' motivations, wrote:

The formal model of the self-interested legislator is very easy to understand. What I’m saying is hard to understand is the actual psychology of this kind of behavior. I think I now have a much better grasp than I once did of what’s going on inside the heads of people who have ideological beliefs I disagree with. But I find it very difficult to extend my powers of moral imagination to the kind of people who hold high political office in the United States.

Instead, we’re fated to be ruled by the sort of people who are really desperate to cling to power. But it still strikes me as a very odd mentality.

If prostitution is the oldest profession, then man maneuvering to rule/control his fellow man is a close second. (Of course, the line between the two is hardly clear.) Governing politics embodies ideas so old and basic they've made it into the religious canon, and suffice it to say one doesn't need a degree in psychology to figure them out. What I want to know is how, after we have known how corrupting power is for--quite literally--thousands of years, intelligent people, especially those of us who live and work near the locus of political power, could ever be so naive as to happily grant the governing authority more power over our money and individual liberty, whatever the politicians use for their stated motivation.

Some may state that comparing today's politicians to Rome is not fair, given the great societal changes of the past two millenia. But I ask, has human nature changed in that time? Have the Seven Deadly Sins been erased from the human heart? And more concretely, have these things changed since the days of Mark Twain?H.L. Mencken? Sinclair Lewis? Will Rogers? Woodward & Bernstein? How politicians grab and cling to power is far less mystifying to me than someone as intelligent as Yglesias looking at the bloated bureaucracy of government, the dog-eat-dog fights that we call "election cycles," the cloakroom logrolling deals "to get things done"and then attempt to rationalize and assign any moral commitment to the people whose ability to lie to your face is a career necessity. (And while a perhaps noble gesture on J.P.'s part, I also have a hard time imagining the quiet torture of life as Ted Kennedy, especially after reading and hearing this).
I'd like to think that Yglesias's overall point is what he said it was in the follow-up post: that he just can't get into the mind of a politician. However, it still seems to me that there is a dramatic cognitive dissonance between what he--and, extending it further to most well-meaning "progressives"-- feels politically and what he painfully admits to knowing about politicians when he writes sentences like this about the departed senior senator from Massachusetts (who indeed was excellent on trucking and airline deregulation in the 1970s):

The moral of the story isn’t that “regulation is bad” but that progressive politics at its best isn’t about bigger government but about attacking privilege and power.

In the end, Ted Kennedy was a deeply flawed man, of flawed moral and political character. He was bred for power, he attained it through legacy, and he used it to ends that suited him, for good and ill. With more Bushes, Clintons, and Kennedys still on the political horizon, I don't think we've seen the last of the political dynasties. But I sincerely hope that we have seen the end of the likes of Ted Kennedy.

Funding Something Does Not Make It Viable

For those who believe the government needs to "invest" in green technologies, let's see what bipartisan consensus in this area has yielded so far:

The biofuels revolution that promised to reduce America's dependence on foreign oil is fizzling out.

Two-thirds of U.S. biodiesel production capacity now sits unused, reports the National Biodiesel Board. Biodiesel, a crucial part of government efforts to develop alternative fuels for trucks and factories, has been hit hard by the recession and falling oil prices.

The global credit crisis, a glut of capacity, lower oil prices and delayed government rules changes on fuel mixes are threatening the viability of two of the three main biofuel sectors -- biodiesel and next-generation fuels derived from feedstocks other than food. Ethanol, the largest biofuel sector, is also in financial trouble, although longstanding government support will likely protect it.

Earlier this year, GreenHunter Energy Inc., operator of the nation's largest biodiesel refinery, stopped production and in June said it may have to sell its Houston plant, only a year after politicians presided over its opening. Dozens of other new biodiesel plants, which make a diesel substitute from vegetable oils and animal fats, have stopped operating because biodiesel production is no longer economical.

Basically, it's been a disaster. So, what's the solution? More government funding, duh:

Critics of the biofuels boom say government support helped create the mess in the first place. In 2007, biofuels including ethanol received $3.25 billion in subsidies and support -- more than nuclear, solar or any other energy source, according to the Energy Information Administration. With new stimulus funding, this figure is expected to jump. New Energy Finance Ltd., an alternative-energy research firm, estimates that blending mandates alone would provide over $33 billion in tax credits to the biofuels industry from 2009 through 2013.

Not all biofuels may be worth the investment because they divert land from food crops, are expensive to produce and may be eclipsed by the electric car. One fact cited against biofuels: If the entire U.S. supply of vegetable oils and animal fats were diverted to make biodiesel, production still would amount to at most 7% of U.S. diesel demand.

Producers and investors now are pushing for swift and aggressive government help. Biodiesel makers are lobbying to kick-start the delayed blending mandates immediately and extend biodiesel tax credits, which expire in December.

The organization (i.e., government) that routinely compounds bad investments by 'infusing' more 'investment' is trying to take over more and more of our economy. And, now officially in the OED under the term chutzpah, people with straight faces are still using the term "fiscal responsibility" when talking about this administration's economic plans.

H/T Jonathan Adler
Posted by JPB at 9:00 AM No comments:

The teacher who ran my middle school chess club (yes, I have ALWAYS been a geek.) got this from a Ft. Wayne major chain's supermarket. I won't say which one, but damn: 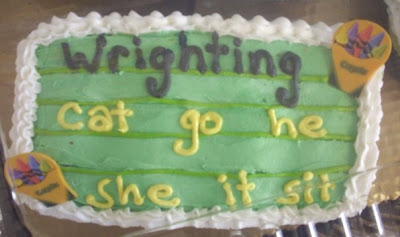 I am at once terribly amused and saddened by this.
Posted by JPB at 3:38 PM 1 comment:

My Idea for a New Constitutional Amendment

Amendment XXVIII: A minimally informed Congress, being necessary to preserve liberty for its citizens, all employees of this Federal Government, elected to office, duly appointed, or otherwise hired, shall be required to take a fundamental civics class and pass an exam on the functions, powers, and limits of this government, and shall be required to retake and pass the exam on an annual basis. Failure to pass this exam at any time, refusal to adhere by said limits, and otherwise violate oaths of office requires immediate and permanent removal from office and all emoluments therefrom shall be irrevocably denied.

Of course, I'm not being serious, but stuff like this does make you wish there was some sort of minimum threshold of constitutional understanding that rule- and lawmaking government agents of this country maintained:

In what may prove to be her most controversial remarks to date, Democratic Rep. Carol Shea-Porter on Tuesday defended Washington’s efforts to reform the American health care system by telling a talk radio caller, “The Constitution did not cover everything.”

Shea-Porter serves on the House Education and Labor Committee, one of three committees in the House with jurisdiction over health reform.

The Club For Growth had this to say:

Someone should bring to Shea-Porter's attention that things not covered in the Constitution are prohibited, not available. You know, it's that whole "enumerated powers" thing. She should brush up on the document she swore to defend by reading this. She should pay close attention to the 10th Amendment, too.