If you want people to stop thinking of you as a bunch of unintelligent xenophobic hillbillies... 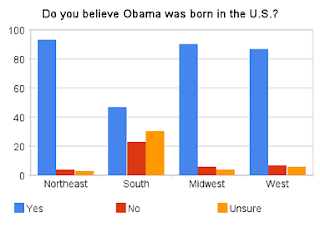 PS: Republicans, if you don't want to be thought of as a party that caters only to said Southern yahoos...oh, wait. Nevermind.
Posted by JPB at 12:37 PM No comments:

A Quote of the Day Two-Fer:

None of the leading Democrats really believes that our civil rights are being trampled on; including president Obama, who has still achieved nothing substantive whatsoever for gay Americans.

Oh, I forgot the cocktail party. Always great to throw a cocktail party for the gays. That's what they really want, isn't it? Just give them some cocktails, ask for more money and they'll forget about their civil rights.

If you're a Republican, a lot of things are logical: the entire debt began the moment Obama took office; Bush and Cheney never tortured anyone, but Obama is about to; the WMDs really are in Iraq; the president has the constitutional power to send tanks into the streets to arrest any American without charges; deficits don't matter; Obama is a Kenyan Muslim impostor; and Sarah Palin was qualified to be president of the United States at a moment's notice.

There are more than a couple issues I disagree with Sullivan on, but I think he, Greenwald, and Maddow are really sticking it to both parties, and rightfully so.

And I didn't realize until I typed the three names, but is it just a coincidence that three of the most thoughtful critics of Obama are openly gay journalists? (Also worth noting, the most forgiving of the three is the self-proclaimed conservative, Sullivan.) I think this probably has a lot to do with their open support of Obama's platform, and--like many of us less Left-inclined--their profound disappointment with the lack of "Change" on so many important, non-DNC issues. The rest of the Left refuses to come to terms with this, and that is to the detriment of all of us.
Posted by JPB at 9:09 AM No comments:

The blurb from the New York Times email update this morning linking to this story:

Gov. Arnold Schwarzenegger’s centrism in California appeals less to the Republican Party’s base than the resistance push of Senator Mitch McConnell of Kentucky.

I'm no McConnell Republican, but if Schwarzenegger Republicanism means "centrist," "centrist" must mean "ideologically bankrupt."
Posted by JPB at 1:40 AM No comments: