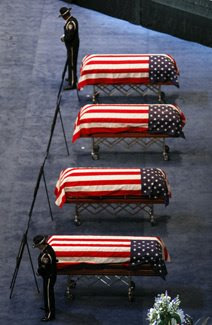 Just because of my subject of professional interest--the Drug War and criminal justice abuses--I tend to be much more critical of the police on this website than not. I think it is of vital importance that media and policymakers hold law enforcement to account for the abuses of authority that often happen. Absent a check on the police power, a police state will naturally emerge.

This is not to say, however, that I don't respect the men and women who serve as police officers around the country. There are very good officers serving in nearly every precinct in the United States, and often they will be overlooked because they are doing their jobs well. Their names are tarnished every time a fellow officer goes to far in their duties or in their personal lives.

My father is a retired officer and detective from the Fort Wayne Police Department. He was a beat cop for most of his career. He's directed traffic and pulled over motorists, in addition to the murder investigations he conducted as a detective. What happened to the four officers in Oakland could have happened to him at some point in his career. My sympathies go out to the families of the murdered officers.

Sent to London on a 2 to 3 year commitment, half a house left in storage in CT, we have been here 'indefinitely' for 11 years pushing 12. We were unable to press for anything more than the ex-pat package we were given at the beginning and lost even housing support after the first 5 years.Our housing costs rose to 5 times what we paid in Connecticut. The salary did not.

Raises were only given in the 'bonus'. So imagine having to pay 5 times your mortgage or rent on your current salary with the promise of the rest of your compensation to come once a year, in December. How do you leave that job?

Do you leave in December and disrupt your children's education? Well, not without a very good reason.

Do you leave at the end of the school year and essentially throw away 6 months of under compensated work? Not likely.

- Oh and, a percentage of your paycheck you will be forced to 're-invest' in the company for 5 years before you will see it.

Since January 2008 [my husband] has been working with Congressional auditors and investigators and the FBI to compile evidence on the deals and dealings of the people responsible, most particularly [his boss] Joe Cassano.

Then the government and AIG parent lied to us. My husband had been asked to, and signed an agreement to stay for the next 2 years. In October we were told that all the prior compensation we had been forced to 're-invest' in AIG was gone and would never ever be paid to us EVER no matter whether the company ever made any more money ever again.

It was a body blow. It was what we had worked 15 years for. It was our children's education, our retirement, the down payment on a house (we own nothing). Can you feel it? That's the draining away of hope.

But one bone was thrown - we were assured that the 'retention payments' (remember we're still on a 15 year old salary that's never risen so this is actually the bulk of our annual compensation)
would be paid.

Assured by Cuomo, the Federal Government and Liddy, the CEO of AIG. So he went back to work for another 6 months.

They paid us part in December - I suppose I should have smelled a rat, but that's that 20/20 hindsight thing. It was nice, we'd planned on no Christmas as we didn't expect the money until March. So the boys got to pick out something they really wanted and we had a nice Christmas.

The year before they had moved our payment from December to March. Yes, we had budgeted for 12 months and it suddenly turned into 15. Could you do that? Go 3 months without getting paid. Amazingly we managed.

We waited worried that the March payment might not come, despite the assurances. We counted the days until the transfer was to be made, checking the FX rate, wondering what the final number would be that we would live on and try to rebuild the children's education fund with - retirement fund will have to wait.

And then our government betrayed us, painted us as thieves and threw our co-workers in Connecticut to the mob. No one ever approached anyone at FP to re-negotiate those contracts and everyone currently screaming about them knew what they contained in October if not in January.

The Democrats can demonize the rich all they like, but the fact of the matter is that when you punish people unfairly, innocent, decent, hardworking people get hurt.

Lesson: Hope a loud plurality of Americans doesn't get upset at you, lest the government comes to exact its misplaced vengeance upon you.

From: New York magazine blog.
Posted by JPB at 3:36 PM No comments:

Anyone familiar with "Black Studies" or whatever you want to call it (AA History, AAADS, etc.) knows the name of John Hope Franklin. He literally wrote the book on Black History--'From Slavery to Freedom'--the 8th edition of which is a about two feet away from me on my office desk as I type this. He died today at the age of 94.

He was a gifted scholar and an engaging writer--something difficult to find among historians. Anyone who is dismissive of "Black History" has never read Dr. Franklin's work, and is lesser for it.

UPDATE: An excellent tribute by Walter Dellinger, legal juggernaut, in WaPo here.
Posted by JPB at 5:15 PM No comments:

No arrest. No charges. No money.:

FORT WAYNE--Going 62 in a 50-mph zone, a Jeep barreled west on a slippery, snow-covered Airport Expressway on Valentine’s Day and blew past an Allen County sheriff’s squad car.

In the Jeep’s back seat, police found more than $26,000 in cash wrapped in a stocking cap.

Though officers held the two men for a short time in squad cars, they were eventually released without charges, save for the driver receiving a citation for driving with a suspended license.

And the money? The police kept it.

Yep. Whole thing. All of it. Legalized theft.

“If it’s way, way over and above what a normal person will carry, and if things don’t add up (on how it was acquired), we take the money,” said Lt. Art Barile, head of the sheriff department’s vice and narcotics unit and the Allen County Drug Task Force, a multiagency unit run out of the sheriff’s department.

How often money is confiscated from people not charged with crimes is hard to determine, Barile said, but his best guess for his department is that it happens “maybe 10 percent of the time” his department performs a seizure.(emphasis mine)

Now what would make a police outfit do something like that?

Most of the money seized comes from drug cases and can then be used by various law enforcement agencies.

Which, invariably, leads to this:

And at least one local agency, the Allen County Prosecutor’s Office, has taken a more aggressive approach in forfeiture cases, with the amount of money in its state seizure fund growing from more than $53,000 in 2004 to more than $105,000 in 2008, according to Allen County’s Chief Deputy Prosecutor Michael McAlexander.

Where have you gone, 5th Amendment?

No person shall be held to answer for a capital, or otherwise infamous crime, unless on a presentment or indictment of a Grand Jury, except in cases arising in the land or naval forces, or in the Militia, when in actual service in time of War or public danger; nor shall any person be subject for the same offence to be twice put in jeopardy of life or limb; nor shall be compelled in any criminal case to be a witness against himself, nor be deprived of life, liberty, or PROPERTY, without due process of law; nor shall private property be taken for public use, without just compensation.

Because it's "way, way" more than a normal person would carry should not pass the laugh test as substantive or procedural due process. But, when police funding is on the line, all bets are off.

But this is just bullshit:

After opposition from the National Rifle Association, 22 Democrats joined Republicans in a Senate vote this month to negate the District of Columbia's tough gun registration requirements and overturn its ban on rapid-fire semiautomatic weapons.(emphasis mine)

And by "rapid-fire semiautomatic weapons" they mean handguns that aren't revolvers--aka a modern sidearm. People who no nothing of firearms may conclude that such language clears the way for fully-automatic Uzis. The difference, of course, is that you have to pull the trigger each time you want to fire a shot with a semiautomatic, whereas Uzis and other sub-machine guns can fire multiple round bursts. Shots fired from legal handguns would only be as rapid as the finger on the trigger. Many revolvers are dual-action, with admittedly more trigger resistance, meaning an experienced user could nearly as easily get off "rapid-fire" shots with a revolver.

If the press wants to shake the image of being biased as "liberal," they need to stop abusing language to make "conservative"-backed ideas sound scarier than they are.
Posted by JPB at 12:32 PM 2 comments:

The State of the Union

as told by George Will:

With the braying of 328 yahoos -- members of the House of Representatives who voted for retroactive and punitive use of the tax code to confiscate the legal earnings of a small, unpopular group -- still reverberating, the Obama administration yesterday invited private-sector investors to become business partners with the capricious and increasingly anti-constitutional government. This latest plan to unfreeze the financial system came almost half a year after Congress shoveled $700 billion into the Troubled Assets Relief Program, $325 billion of which has been spent without purchasing any toxic assets.

Read the whole thing here.
Posted by JPB at 10:23 AM No comments:

Given Obama's recent video outreach to the Persians, I thought this would be a suitable MMM, for lack of anything else popping into my very tired head.

When Government is the Problem

It only makes sense to...

AIG management has asked employees to let them know by 5 pm ET Monday whether they plan to return all or part of their retention bonuses.

You hear that? That's the sound of AIG's best talent polishing their résumés before they fly out the door toward businesses not subject to punitive taxation.

What is the point of bailing out a business that you're just going to destroy anyway? Populist policy is cancerous to business, prosperity, and common sense. It is, essentially, "mob rule."

This is not to be confused with "the mob" in the organized crime/mafia sense. This is because when the mafia drives a business into the ground, it has the sense to make a profit for itself. No, this is the torches and ropes kind of mob that reflexively destroys without thinking.

Consequences be damned, they must be punished!
Posted by JPB at 11:03 AM 1 comment:

AIG Bonuses are to Bailout as... 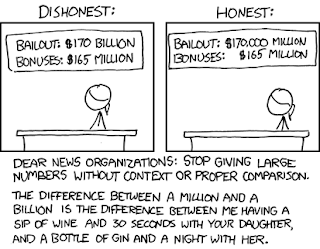