The Heller case should be released next week, probably Monday, and you can be sure that Cato will have something to say about it. So, for the facts of the case, as well as Bob Levy's statement as soon as the decision comes down, please go here.

My head nearly exploded this morning when I read this opening paragraph of a WSJ editorial:

The best news about yesterday's White House-Democrat deal on overseas eavesdropping is that the ACLU and the anti-antiterror Internet mob are apoplectic. This can only be good for U.S. national security. Too bad the compromise also comes at the cost of a further erosion of Presidential war powers.

I've ranted against "anti-antiterror" before, although it still infuriates me to no end. If the WSJ is going to be that way, they should just call people like me pro-terrorist or communist or whatever other ridiculous smear they can think of for properly comprehending the 4th Amendment to the Constitution of the United States. If they did that, they could limit their offensiveness to their own ideas without butchering the language to mask the absurdity of their implication.

Secondly, domestic intelligence gathering is not a tool of war. Indeed, it is a criminal justice issue and thus properly relegated to the judicial oversight of the FISA court. Under this twisted logic that conflates a policy talking-point (i.e. "War on Terror") with a conflict between military or paramilitary forces (i.e., war), one could easily argue for discarding Constitutional rights in the "War on Drugs" or even the "War on Poverty"--and they have.

Calling something a "war" as a political tactic does not make it so. Such language is simply a political trick to convince the public that the government can strip individuals rights for the sake of some greater good during a national emergency, that may or may not be as dangerous as advertised.

More on the political chicanery of the ubiquitous war metaphor can be found in my friend Gene Healy's book Cult of the Presidency. Buy it here.
Posted by JPB at 12:33 AM No comments: 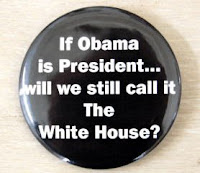 Oh, Texas Republicans, you are always so funny. Here is a fun button worn by everyone at the Texas GOP convention. When not making hilarious rape jokes, Texas Republicans like to make jokes about ambitious coloreds.

How many more months am I going to keep finding obnoxious shit like this while simultaneously hearing about nonsensical "post-racialism"????
Posted by JPB at 2:50 PM No comments: