I'm taking a much-needed and long-overdue vacation until January 2. I hope you all have a merry / happy/ joyous/peaceful/safe/relaxing/intoxicated Xmas/Hanukkah/Eid al-Adha/Kwanzaa/Spaghetti Dinner/winter break/ graduation/ couple-of-days-off-because-religious-people-run-the-country.
Posted by JPB at 9:02 AM No comments:

A bit of prologue before I explain myself:

5 Atlanta Falcons were fined yesterday for violating NFL uniform policies by displaying "unauthorized personal messages" which supported their locked-up teammate. Anyone who follows the NFL knows that this is not unusual, the league having previously fined QB Jake Plummer for honoring his college and pro teammate Pat Tillman (who was killed in Afghanistan) and forbidding Colts QB Peyton Manning from wearing black shoes to honor Hall of Fame Colts QB Johnny Unitas because only the Ravens were sanctioned to publicly pay their respects. (When Unitas played, the Colts were in Baltimore.)

So, in that respect, I don't fault the NFL for coming down on these players because they are being consistent with policy, however stupid the policy is.

In fact, I don't fault the NFL at all. They are a business heavily reliant on their cultivated image and do what they feel necessary to maintain it. Furthermore, if they banned Michael Vick from ever playing again, I wouldn't have a problem with it. What he did was reprehensible and deserved harsh rebuke and punishment.

Prison is a horrible place, and more horrible than it should be. Gang warfare, the drug trade, random violence, murders, rapes and sexual slavery are all part and parcel of the American correctional system. A stint in prison can be psychologically damaging even if you get out without physical harm. It is a denial of the fundamental right of human liberty -- which it should be for those who violate the rights of others. (It is a crime itself that we allow our prisons to function like this and they should be reformed, but that is not within the scope of this post)

But Michael Vick did not violate anyone else's rights. Dogs, however lovable, are not people. They have no rights, as properly understood. As a practical matter, even the SPCA realizes this.

Nearly every animal shelter in America kills animals. They call it "euthanasia" -- but we all know what it is. When animals are unwanted and not adopted, the shelters "put them down" -- a violation of the most fundamental right-- the right to life.

Some people, even staunch libertarians, are backing the government on this one. Yet, if the animals had rights, would not the government not be responsible for the dogs killed and tortured over the course of the undercover investigation? If those were people being tortured and killed, the government would be unquestionably obligated to stop the action immediately. They weren't, because the lives and well-being of those dogs were sacrificed for the court case. That could never happen to people because?...PEOPLE HAVE RIGHTS.

All of this is not to say Vick should not be punished. I have no problem with a state or municipal court fining Vick, and harshly if they so choose, for violating some moral standard of the community. Also, as I said above, the NFL can do with his employment whatever they wish within the stipulations of his contract. But as it currently stands, Vick pleaded guilty to federal charges, which by itself is BS on a stick, and is also facing state charges in Virginia for the same crimes -- a clear violation of Double Jeopardy protection.

So yes, free Mike Vick. Neither he nor society will be better off by subjecting him to the violent criminal culture of prison life. It is perfectly within reason to think that both he and society will actually be worse off once he is released.
Posted by JPB at 1:29 PM No comments:

Sometimes, I really hate being right:

WASHINGTON (AP) -- Congress announced plans Tuesday to review the use of performance-enhancing drugs, with star-studded hearings scheduled next month and legislation to limit access to steroids and growth hormones.

Two House panels are planning mid-January hearings featuring former Sen. George Mitchell, author of a bombshell report last week that linked more than 80 players to the illegal use of steroids and other performance-enhancing drugs. Baseball players, likely some of those named in the report, could be invited to testify as well.

So, instead of looking forward to pitchers and catchers reporting to Spring Training, we can all watch as a bunch of lawyers grandstand about a matter that has absolutely no legitimate place in the halls of Congress and try to expand federal control over what people put into their bodies.
Posted by JPB at 5:22 PM No comments:

Every time I begin to like the French, (i.e., an American-friendly PM who dates super models), I am quickly reminded why I dislike their culture so:

France's highest court has ruled that Amazon.com may no longer offer free delivery of books in that country. The ruling came in a lawsuit filed by the French Booksellers' Union. The price of books is highly regulated in France, and booksellers may not discount books more than 5 percent of the publisher's suggested price.

Why We Judge Others 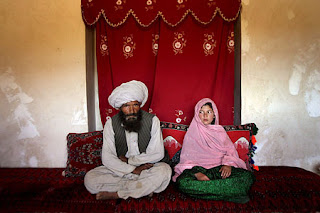 Many of my left-liberal friends tend to shy away from criticizing other cultures saying basically that "we aren't in them, so who are we to judge?" Here's your answer.

What you see is a 40-year-old man and his new 11(!!!!!)-year-old wife in Afghanistan. I don't give a damn what God you believe in, this is beyond the pale of all modes of acceptability.

This is not to say that we should go into countries to stop this (of course, we ARE already occupying this country). But we just let these crimes go on without so much as stern comment?

UPDATE: A female voice from within the Muslim world here.
Posted by JPB at 2:35 PM No comments:

In one of the rare cases a city holds itself accountable for the reckless actions of its police officers, the City of Denver is paying nearly a million dollars to settle a claim against them for killing an innocent man in his bed:

The Denver City Council approved a $900,000 settlement to the family of Frank Lobato.

July 11th, 2004, Denver police went into a home searching for a suspect, but ended up shooting and killing the 64-year-old man while he lay in his bed unarmed.

This is not one of those moments you can celebrate as a victory, but it is certainly a step in the right direction.

A related note: a nice write-up in Minnesota about Radley's work on SWAT raids here.
Posted by JPB at 12:10 PM No comments:

Evidence that just because you're against (or in favor of, for that matter) Kyoto, doesn't mean that it is necessarily reflective of your feelings on the environment:

Just as Norwegian delegates to the UN's conference on climate change started heading home from Bali, came news that Norway's own carbon emissions rose 80 percent from 1990 to 2004.

Prime Minister Jens Stoltenberg had to admit to newspaper Dagsavisen that he still uses an old-fashioned and emission-generating oil heater in his home, even though his own government is strongly encouraging Norwegian households to replace such heating systems.

Lefties from all over the globe are working to come up with another flaccid global treaty that promises nothing more than economic restrictions and growth retardation -- the most harmful effects to developing countries and poor people in Western countries -- while accomplishing virtually (or in this case, literally) nothing in the way of its stated goals of carbon reduction.

Being mindful of our environment and conserving energy and resources are good ideas. Setting arbitrary mandates and fostering economic hardship on the world's poor without positive results is bourgeois meddling at its finest -- and not coincidentally, most reflective of the socialist past of the enviro-left's proponents.