There was much ado on the Twitters this week about what conservatism is, thanks to patently false comments by Jim DeMint, because people tend to lump all conservatives together as if they all believe the same thing.

Similarly, people often think of libertarians as having a monolithic way of thinking, but this could not be further from the truth. Indeed, to paraphrase Brian Doherty's book Radicals for Capitalism, if two libertarians agree on something, one invariably will accuse the other of selling out.

To clear this up, then, I've put together a short list of the many kinds of libertarians so you can tell us apart:

Catoites: Associated with the Cato Institute, typically urbane libertines. Work in a giant greenhouse. Often mistaken for Republicans, but indeed they are too principled.

Reasonoids: Associated with reason magazine, typically libertine urbanites with an aversion to professional attire and a penchant for Johnny Cash impersonators.

CEIers: Convinced that the polar bear floating down the Potomac was just a hallucination brought on by delerium tremens. Remedy: more drink.

Randians/Objectivists:Making the principled argument for selfishness since 1957. They believe in objective truth as told by Rand, so they are very much like fundamentalist Muslims though thankfully they're too self-absorbed to blow themselves up.

Paulistas: A cult of personality much like the Randians but lack any cognizable sense of humor. They are best known for driving flame-traffic on websites that criticize the great and powerful Ron.

Liberaltarians: The one group in America that can legitimately blame Obama for their unemployment.

Beckians: Nominal libertarians but de facto conservative populists whose manifesto pines for the day when America was collectively at the height of its irrationality and bloodlust as we entered the anger stage of the grief process. (No, really.) Also, they seem to believe Jesus wrote the Constitution.

Constitutionalists: Lawyers and legal types who take the Constitution much more seriously than the Founders ever did. They seem to believe that Madison was Jesus.

Seasteaders: Anarchists (on a boat!) who've never been marauded by pirates.

There you go. So the next time you're navigating a room full of drunk libertarians, this little cheat sheet will give you a good idea of what kind of person you're dealing with.

Have a good weekend!

People aren't especially insane now. They've always been this way--it's just now, thanks to technology, we don't have the luxury of giving them the benefit of the doubt. Think of it like a window into the box with Schrodinger's cat. We knew the populace was unsophisticated and tribal, but now we can see exactly what that entails. 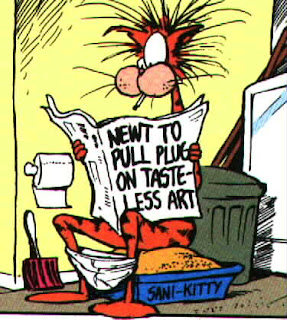