The cojones on this Congress are approaching Blagojevich magnitude:

Self-proclaimed victims of global warming or those who "expect to suffer" from it - from beachfront property owners to asthmatics - for the first time would be able to sue the federal government or private businesses over greenhouse gas emissions under a little-noticed provision slipped into the House climate bill. (emphasis mine)

There is a long-established standard in courts of law: a plaintiff must provide what is known as "standing." Standing, in a nutshell, is reasonable proof that the plaintiff has suffered a harm because of the law or action they are challenging. For example, the D.C. gun case was originally called "Parker v. D.C.," but the complaints of Ms. Parker and all the other plaintiffs except Dick Heller were thrown out for lack of standing. Their complaints were based on conjecture: that they could reasonably expect to be arrested for having a firearm didn't pass the D.C. Circuit Court of Appeals' standing standard. Dick Heller showed standing by being rejected for a gun permit, going through a procedural hurdle to show the government actively denied his purported 2nd Amendment right--i.e., harm.

While I find that particular interpretation dubious, it illustrates my point that standing is an important and substantive hurdle that limits the suits brought into court. Expanding standing to expected harm, based on arbitrary standards of emissions, is entirely too burdensome on any defendant, whether a private entity or the federal government.

For example: while you are more likely to develop lung cancer or emphysema from smoking, it is not a statistical certainty. Indeed, you may get one or the other--or neither. You may, as smokers often defend themselves, get hit by a bus tomorrow and never suffer any long-term consequences from smoking. This law, if passed, will allow people to sue on grounds that they may--or indeed, may not--suffer harm from emissions.

This is not to anyway argue with the scientific methods of global warming. But there is not a single reputable study or finding that says that any individual or group will, with 100% certainty, suffer damages or harm as a result of carbon emissions. Furthermore, EVEN if there were, the extent of that damage is purely conjecture and incalculable for the purposes of awarding damages.

To exact an amount for damages that haven't happened yet is anathema to our theories of jurisprudence. This is a dangerous provision that can be described as nothing other than a gift to environmentalists and trial lawyers. This isn't justice: this is punitive preemption.

Ronald Coase famously dealt with pollution in market terms nearly 40 years ago, but I will grant that even in his framework, harm will come to people. In that case, the harmed have recourse through the court system, as they very well should. But while I fear an environmental regulatory regime under this Congress, it is infinitely preferable to an EPA rendered impotent by countless and contradicting lawsuits.

If they stop and think about it, I doubt highly that even environmentalist would like environmental protection by judicial fiat either--unless, of course, they want Justice Scalia determining environmental standards?
Posted by JPB at 10:50 AM 1 comment: 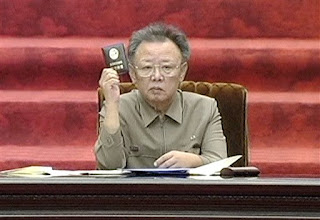 Two economists explain their hypothesis about the current economic crisis in today's WSJ:

The 2001 recession might have ended the [housing] bubble, but the Federal Reserve decided to pursue an unusually expansionary monetary policy in order to counteract the downturn. When the Fed increased liquidity, money naturally flowed to the fastest expanding sector. Both the Clinton and Bush administrations aggressively pursued the goal of expanding homeownership, so credit standards eroded. Lenders and the investment banks that securitized mortgages used rising home prices to justify loans to buyers with limited assets and income. Rating agencies accepted the hypothesis of ever rising home values, gave large portions of each security issue an investment-grade rating, and investors gobbled them up.

But housing expenditures in the U.S. and most of the developed world have historically taken about 30% of household income. If housing prices more than double in a seven-year period without a commensurate increase in income, eventually something has to give. When subprime lending, the interest-only adjustable-rate mortgage (ARM), and the negative-equity option ARM were no longer able to sustain the flow of new buyers, the inevitable crash could no longer be delayed.

The price decline started in 2006. Then policies designed to promote the American dream instead produced a nightmare. Trillions of dollars of mortgages, written to buyers with slender equity, started a wave of delinquencies and defaults. Borrowers' losses were limited to their small down payments; hence, the lion's share of the losses was transmitted into the financial system and it collapsed.

A few things to note: 1) the government loosened credit to those who shouldn't have received it, thus sowing the seeds for the credit swaps; 2) the Fed was too slow to recognize and thus respond to the problems that the Congressionally encouraged behavior caused; and 3) while bubbles occur in the market, they are usually self-correcting and don't inflict catastrophic damage on the greater economy when left to themselves (i.e., without government-sanctioned market manipulation). Yet, the lesson the left seems to have learned from this is to manipulate the market, like a kid who keeps touching a hot stove.

Whole piece in its wonky glory here.
Posted by JPB at 10:18 AM No comments:

The Cost of War

Below is a photograph, of the first of its kind since 1991, of the body of a U.S. serviceman returning home Sunday night after being killed in action. 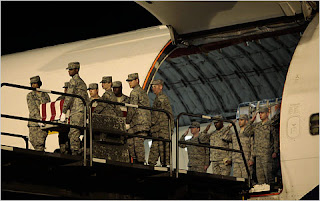 The man in the casket was USAF Staff Sgt. Phillip Myers, 30, of Hopewell, VA, killed two days ago by an IED.

Even though this cannot capture the tragedy and grief of his friends and family, I believe that this is an important reminder of what our men and women of our military face every time our politicians send them into harm's way. Whether you believe the action is justified or wrong-headed, America's short attention span should be jolted by images like these to remind it of the real cost of war--beyond and before the money is counted.

I have several friends who have come home from the battlefields--all safely, thankfully--and I know of a couple others from years back still serving there. I want them to come back home safely to their happy families at the airport and not like this.

But the return of those who gave their very lives in service to their country should not be done under the cloak of government secrecy. I can't speak for my friends, past and present, in the service, but I personally view it as dishonorable that the government would hide them, as if we were ashamed of them. These men and women sacrificed themselves: the least we could do is acknowledge them as they return home.

UPDATE: Better write-up of Sgt. Myers' return at WaPo.
Posted by JPB at 1:23 AM No comments:

Whenever possible, I embed the videos in the MMMs because I'm not trying to pimp any site or redirect people all over the place just to hear a song. However, I came across this song (again) recently and is one of the songs I'm going to upload to my recently resurrected iPod. (It's been dead for 2 years! How did I live so long without such a large part of my music library?!?!?) This song, for whatever reason, is hardly available (for free) anywhere and, I'm guessing, won't last very long on the site I managed to link you to.

Anyway, I apologize for the redirect, but here's your MMM for this week.
Posted by JPB at 12:55 AM No comments: