I was only vaguely aware of Paula Deen until recent events proved alleged her to be a relic of the Old South who still likes to say "nigger" and various other less-than-pleasant holdovers from the Good ol Days. Granted, this is one of the few times when that segment of the commentariat who always rush to point out what appears to be at least plausibly racist MUST HAVE a plausible non-racist explanation will say "oh yeah, that's pretty racist." But then it invariably devolves into 'this shows how rare racism really is' and we're back to where we were before. For this reason, I hadn't really planned on writing anything until I read the TPM write-up of the affair, commenting on a part of her book:


In the book, Deen, who was born in 1947, frankly wrote about her youth in Albany, Ga., where she “never thought” about the fact she was living “in the mix of what was fixin’ to be a huge social change.”

“It was happening right under our noses: our local African-Americans were claimin’ their right for fair and equal treatment and some white folks were inspired to rethink old ways,” wrote Deen. “Still, I hardly noticed.”

The language of the second graf struck me. The use of "our" to describe southern blacks is not just a semantic accident--that reflects years of an assumption that the South and its racial identities are inextricably woven into their singular geo-political identity. This is the same way of thinking that fomented resentment at Yankees meddling with their 'way of life' and starting trouble with their  good Negroes in the 1950s and 60s.

Moreover, that blacks were "claimin'" rights--not demanding, not asserting--claiming, as if even years later, equal treatment under the law was still a matter of opinion. But these 'claims,' "inspired" some white folks to "rethink" old ways. 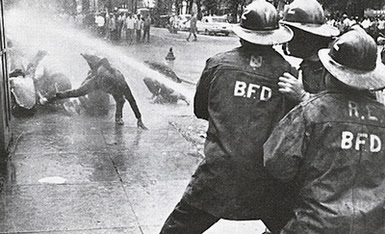 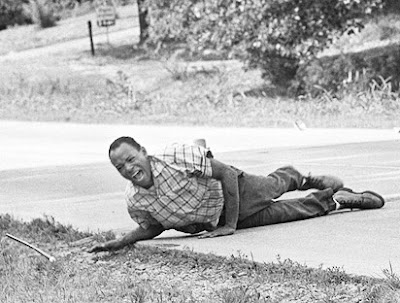 But still, she "hardly noticed" the most momentous social change of her lifetime.

Ms. Deen is just the latest person to inadvertently expose the despicable lies needed to prop up the mythical 'Southern Heritage.' I don't even care about her aborted attempt to moniker her "Sambo Burger." This willful ignorance about what the South was, what it stood for, and the direct role its people played in the oppression of so many, is the most infuriating thing about their repugnant, beloved "heritage." To even recognize the change, the Southern whites were simply "inspired" to "rethink" how they lived their lives and terrorized others.

They weren't forced by federal law and the National Guard. Hundreds or thousands of terrorists didn't just melt back into the population, never paying for the crimes they committed against blacks who dared 'claim' equality. They weren't a society that enforced its code of oppression with government power and outside of it. It was just a some that needed to rethink old ways. 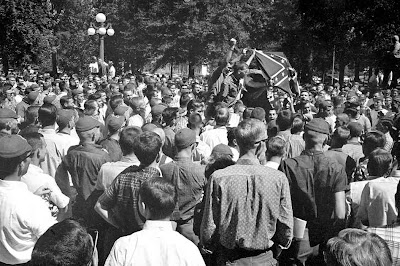 Some people like to show their pride of heritage with flags 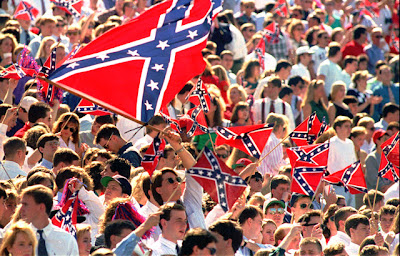