Jim Moran is my congressman. I am not a big fan, and--if I were in a better frame of mind--I'd probably think he goes over the line of acceptable things old white guys can say here, but that's not why I'm writing. I'm writing not as his constituent, a black man, or a libertarian. I'm writing this as a copy editor. Indeed, my beef isn't with Moran--it's with whomever wrote this travesty of a transcription:

"He just seems clueless not that he has climbed abroad ship. He's climbed this latter of opportunity that was constructed by so many of his ancestors' sweat, sacrifice, blood, you know they did everything they could for his generation to be successful. But now that he's climbed abroad ship, instead of reaching down and steadying the latter, he wants to push it off. 'I'm up here. If you're not with me, too bad.' And President Obama, fortunately, is the kind of guy that says 'I was very fortunate to get where I am and I'm going to spend my life trying to steady that latter of opportunity by reducing college tuition and training our workers, trying to get a decent job for everybody. Making sure that while I'm African-American, it really doesn't matter. What matters is my commitment to public service, my love for this country and I'm going to leave a constructive legacy,'" he said. (italics mine)


TWO "abroad" ships? THREE "latters" of opportunity? This copy is so bad I can't even get mad at Moran. I need some aspirin. (click to embiggen) 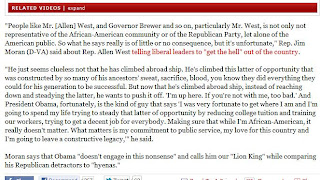 HOUSEKEEPING: For those of you looking for something more substantive from me, I'm in the editing process of an essay I wrote about libertarians and the Confederacy. I hope to get it up at Libertarianism.org late this week or early next week. -jpb