As you probably remember, after 9/11, the newly-created Department of Homeland Security and its head Tom Ridge suggested to the country--with a straight face and no irony--that should there be a chemical or biological attack on the United States, every prepared American would have duct tape to seal themselves in their homes.

As Lewis notes in the link above, during the Cold War, the powers-that-be told kids to hide under their school desks in case of a nuclear attack. Let that sink in: to defend against the force of nature that powers the Sun and all the stars in the sky--the enormous and unfathomably hot titanic balls of fire--the government said "get under wood."

But as illustrated in the graphic below, this Cold War-era PSA provided an even dumber suggestion--I know, I didn't think it was possible either.  Check out #4: 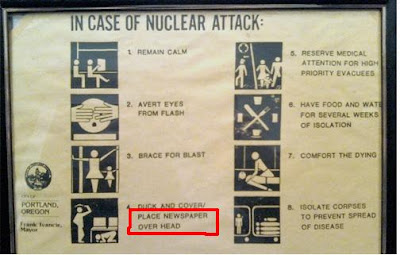 Apparently, newsprint and anything under it is impervious to nuclear fallout.

(Thanks to Tim Andrews for the link.)

TRUSTING A POLITICIAN
Can you trust your politician, the one you voted for? Here’s a simple way to find out. If the elected official, at any level, swears to uphold the Constitution of the United States and defend the United States against all enemies, then turns around to justify legislation and political power that trashes the Constitution and the nation, don’t you believe he or she is not trustworthy? Look at President Obama. He took the Oath in front of the whole nation, and then began trashing it right out of the bag. He, and his Party, does not believe in the U.S. Constitution, preferring instead law by a parliament. But, if they told you that when they ran for office, they would loose. You would never vote for them, yet, many roll over and accept what is given us in the way of tyranny substituted for freedom, of the importance of community over the individual. Are they trustworthy, or is it better they lie and do what the community of organized crime in the American capitol. Claysamerica.com