Disclaimer: I write this on my long-dormant personal blog for the express purpose of distancing my employer from what follows. I composed this strictly on my own time, at my apartment (or on the Metro) on my personal computer and thus should not in any way be read to be part of my professional affiliations, my employer’s tax status, or anything but one more libertarian shouting into the void of the Internet. -JPB

I’ve never voted for a Democrat in an election.* I left the GOP years ago, but when it came down to voting in recent years, I either preferred Republican candidates, picked no candidate, voted for third-party candidates, or—on at least two occasions where I couldn’t care less who won, voted for a feline—once, posthumously. That said, for spearheading criminal justice reform on Capitol Hill, I had planned to vote for Jim Webb—it helped that he was the last of the Blue Dog Dems—but he didn’t run for re-election. For similar reasons, I would vote for term-limited Virginia Governor Terry McAuliffe if given the opportunity, but I won’t get it. (2013 me can’t believe I just typed that.)

Additionally, it has become painfully obvious over time that the GOP had no interest in moving toward a real small-government platform, and the idea that there was even a plurality that cared enough about civil liberties related to anything other than abortion protests was a cruel joke. Small-L libertarians were intellectual window-dressing to a Republican party that cared much more about instituting trans-vaginal ultrasounds, maintaining barriers to social and legal benefits for homosexual couples, public bathroom rules, and fetus funerals than getting the hell out of people’s lives.

I haven’t become more of a Democrat in my almost 10 years in Virginia, but whatever the GOP says it is, it is not a party I can support at all.

To be fair, with some very meager gains among minority voters during the years under George W. Bush, the party’s rhetoric on race had improved. Granted, it was building from the primordial ooze of Lee Atwater race double-talk, so it’s not like these guys were getting Image Awards any time in the near future, but the party leaders at least appeared to realize a strategy that built ONLY on white resentment was not a viable long-term strategy.

But now the guise of double-talk has been wholly and unmistakably discarded.

At the head of the GOP is a hate monger. He long refused to discourage his followers who acted violently. His scorched earth strategy going into the final stretch is a nightmare of demagoguery. He is a fraud, and a reckless and dangerous man who has supporters who chant “USA! USA!” at the prospect of mob rule. Quite literally. 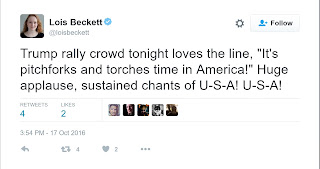 In past years, I’ve argued for voting for a third party candidate as an act of principle. But this argument supposes emotionally and mentally stable, if equally awful, candidates who wouldn’t plunge the world into economic and political chaos.

I’m not overstating it. The stock market hit would probably eclipse the one in 2007, and that would be well before he ever took office. Because stability and reliability are the backbone of a functioning market economy—the only thing reliable in Trump’s campaign is beating the drum of ethno-religious demagoguery—we would likely see world markets tumble.

To hell with that. This isn’t a ‘heroin in vending machines’free market thought experiment. This is 11 million undocumented people and millions more who look and talk like they do that face the prospect of curtailed rights and justifiable fears for their safety. This is a country that is still racially segregated, policed separately and unequally, and whose police unions are lining up behind a racist demagogue. This is a country of immigrants who have faced attacks on mosques, Sikh temples, and just walking down the street for their families’ free choice to live here and be free—or freer, anyway. If actual freedom is your principle, then doing what you can to stop a demagogue should be high on your to-do list.

I love my country. But I don't trust it.

My vote does not convey approval for every one of a candidate’s decisions, any more than my tax dollars do. And no, my vote by itself doesn’t matter at all mathematically. I’ve written about this before too.

But the alternative is not close to equivalently bad. It is so much worse. It’s not close.

Now, because we see names on a ballot that do not belong to the two major parties or that there is a write-in line, we can pretend that we don’t face the two choices that we do. But during none of my previous votes for Bob Barr, Gary Johnson, or Hank the Cat did I think they had a legitimate shot at winning. It was my small way of saying “No.” In almost any other circumstance I can imagine, I would be full-throatedly behind a libertarian protest or preference vote.

But not this year.

Our choices are binary, whether we like the system or not. (I do not.) But this GOP has made quite clear it is unwilling and incapable of reining in a President Trump, and there’s no reason to think a Republican Congress would act on unconstitutional or impeachable offenses. He is an unmitigated disaster for the country already, and it can, in fact, be much worse.

It’s clear my policy preferences aren’t going to win this year. That’s unfortunate, but not terribly unusual. What is different this year are the real world costs of putting a racist demagogue in power.

I’m with Her because Black Lives Matter is more than a phrase to me, despite my reservations about her efficacy to improve the status quo. I’m with Her because I understand that a Trump win isn’t the same to millions of people across this country and this planet not as fortunate as I am. I’m with Her because, in actuality, policies that result in bad outcomes for people of color are far better than no policies, a paranoid delegitimization campaign, and overt racism from the highest office in the land. I'm with Her because my partner gets antisemitic messages because racists have been emboldened by this wretch of a man. I'm with Her because, for all her faults--faults that have and will likely result in more people dying--she's still a more reliable and less dangerous person in re: foreign policy than he is.

I'm with Her because the tangible effects of the imperfect liberty this country provides mean something far more to me than an impotent stand on principle.

*I did vote for Bill Euille in the recent mayoral race in Alexandria, Virginia, but technically he was a write-in candidate because he could not run for his party’s nomination as mayor because his failed in his attempt at winning the Congressional seat now held by Don Beyer.
Posted by JPB at 9:14 PM