Recent and Other Relevant Writing

In the past week or so, I've written a few pieces. Also, recent events have made past writing relevant again. So, instead of starting a newsletter like a lot of writers I know and admire, I thought I'd just bring them all together in one place and you can read as you like.

A recurring theme is American ignorance of history writ large. Over at Rare, I wrote about why Black History is important. (Hint: because it's American history.)

Generally speaking, the way America teaches history is deplorable. The watered-down fairy-tale version of our history can be found in our folklore, grade school textbooks, and throughout our media. Race aside for a moment, how we think about war, government, technology, religion, and nearly everything else tends to be framed in false dichotomies and trivial facts without contextualizing how and why events happened, let alone how events were perceived by those who lived through them.
But in America, despite the best efforts of many, we cannot put race aside. Racism has been omnipresent in American history, but it has been far from static. Slavery and its justifications spawned a particularly awful strain of anti-black racism in America. Racism evolved to seek selfish economic ends and justify punitive unconstitutional laws. It has justified social and economic benefits to some while depriving them to others. It has allowed a tolerance of abuse by both government and private citizens. Racism has broken apart families and even the nation itself.


Relatedly, I wrote here at TBS about FBI director Comey's attempt to view the relationship between law enforcement and black communities historically. (He failed.)

“A tragedy of American life…is that young people in “those neighborhoods” too often inherit a legacy of crime and prison. And with that inheritance, they become part of a police officer’s life, and shape the way that officer—whether white or black—sees the world.”

This is circular logic at its most odious. Law enforcement, in its zeal to fight its war on drugs and crime, extracted scores of men from communities and put them into the criminal justice system. This deprived children of fathers and robbed the communities of economic resources. This,in turn, created the young black men that engender cynicism from today’s officers who “often can’t help” it.

While there is much to be said for back-end reforms that help former inmates return to society, the law enforcement executives who go around preaching about how to fix the men and communities they helped break in the first place tests the patience of anyone who recognizes the grotesque unfairness of our so-called justice system. It’s not all law enforcement’s fault, but they are reticent to acknowledge the role they have and continue to play in “those neighborhoods.”


Marijuana is quasi-legal in DC. That "quasi" bit could allow police to harass and arrest poor black residents while giving affluent white DC the official recognition of the de facto legalization they already enjoy.


Semi-legal status adds ambiguity to the law and complicates law enforcement’s efforts to curb the still-illegal and unregulated for-profit marijuana markets. People will likely still go to prison, families will continue to be disrupted or destroyed, drug deals will continue to lurk in the shadows, and thus neighborhoods will be less safe than they should be. In a policing environment that has a history of unequal enforcement of laws and continues to tolerate civil asset forfeiture, any ambiguity invites abuse of the same people who’ve suffered under prohibition for years. More than four decades of experience should be more than enough to prove the criminal justice system is ill-suited for effective marijuana policy.


Ron Paul is at it again. 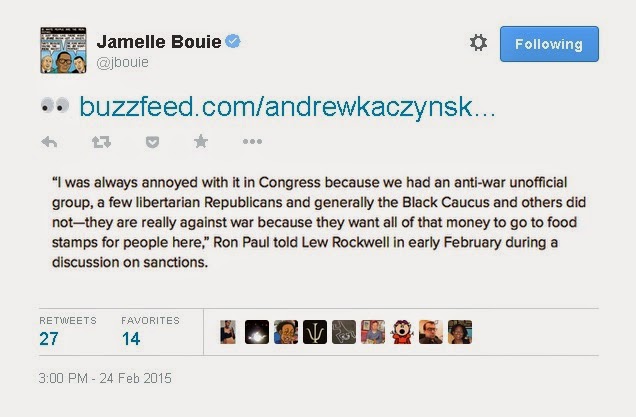 Libertarians need to ditch the racism yesterday. Paul is an embarrassment and more libertarians should say so. My two-part essay on libertarians and race here and here.


Subsequently, libertarians have been associated with the Lost Cause, Civil War revisionism, and the politics of white resentment. The infamous Ron Paul newsletters of the 1980s dripped with racist, homophobic rhetoric in order to drum up support—and fundraising—for the Texas congressman. Separate from that, Paul has given speeches asserting the South was right in the Civil War, preposterously arguing that chattel slavery was not the catalyst for the bloodiest war in American history, and repeating the canard of “States’ Rights”—an argument often used to also support state-sponsored segregation. Paul’s ascension to standard bearer of the modern libertarian movement in recent years invariably calls into question the motivations of its adherents and their dedication to civic equality of minorities.

Finally, it's been 50 years since Malcolm died.


People should remember Malcolm for what he was and what he stood for, not just as a symbol of scaring white people. He believed in the absolute right to self-defense and personal responsibility. He believed in small business and black empowerment.  He wanted jobs and dignity for black people, and he didn’t believe the government as instituted in the United States could provide it.

Similar to what I wrote in my lengthy response to Ta-Nehisi Coates’ remarkable article on reparations, the fundamental divide in civil rights today shouldn’t be about desert or what America should do. Rather, the argument should be about what America could reasonably be expected to do. Just because we elected a black president does not mean the government has gotten remarkably better at delivering on the failed promises of the past two and a half centuries.