On the NYPD Tragedy and Its Aftermath

As most people, I am horrified and saddened by the murder of the two police officers in Brooklyn yesterday. My heart goes out to the family, friends, and colleagues of  officers Wenjian Lui and Raphael Ramos.

But the reaction by some self-styled allies of the NYPD are nothing short of inexcusable. This sentiment may be best illustrated by former New York governor George Pataki: 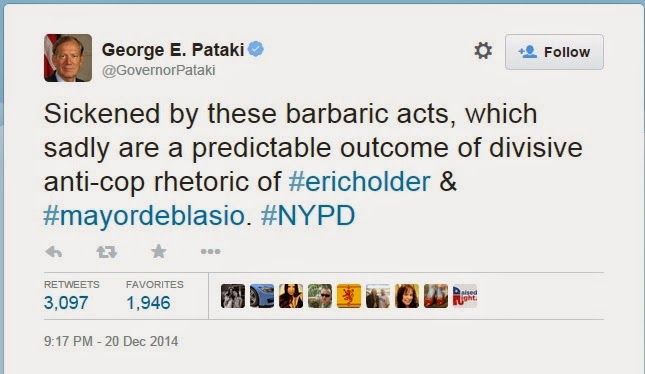 Like Eric Holder, I have immediate family that served honorably and proudly in law enforcement. To assert that people like Holder (and me) who criticize police practices and want police to be better than they are should be held responsible for the acts of a murderous lunatic is reckless and unforgivably insulting.

Need the preening, self-important politicians be reminded: the United States is a country where free speech is an essential tool by which the government for, by, and of the people is held accountable. To say that those who criticize the police are responsible for the random violence inflicted upon some officers by an evidently suicidal man is to express a sentiment that is not only baseless and malicious, but fundamentally un-American in implication.

Beyond the preening politicians, there have been those who would like to characterize criticism as a 'war on cops.' Admittedly, there are those people who have become so fed up with how they and their loved ones have been treated by police officers that criticism comes from a place of anger and frustration. But the police are ultimately responsible for how they treat the public and thus have considerable control over how they are perceived by that public. It is pure fantasy to believe that the outrage that has fueled the dozens of nationwide protests against police brutality has been manufactured against an otherwise beloved police force that in every case has great relationships with the communities they serve.

Furthermore, the war on cops rhetoric coming from some police sources only reinforce the point made by many critics of the police that too many officers hold an "us versus them" mentality when dealing with the public. If the police believe they are working among an enemy population, their treatment of the public will undoubtedly reflect that mindset.

There is no greater threat to police-public relations than a police force that holds open hostility towards the people it is charged with serving. This jeopardizes public safety not only from police-public violence, but endangers communities by undermining the legitimacy of law enforcement itself.

The NYPD and its members have every right to mourn and be outraged by the actions of a lone gunman yesterday. My most sincere sympathies go out to them for their losses. However, that does not give them or anyone else carte blanche to abuse the citizens with whom they come into contact, nor does it require those of us concerned with improving police practices that enable that abuse to remain silent because they have dangerous jobs.

The police are not our enemies, nor are the people the enemy of the police. At a time when the vast majority of reformers are expressing sympathy for the police and the sacrifices they make, self-appointed friends of the police like Gov. Pataki would serve everyone much better by not stoking police fear and resentment. To do otherwise makes everyone--police, protesters, and the general public--less safe.

Hallelujah. Also, Pataki never had anything good to say. Nice to see your input on a terrible situation.