Because of other projects and responsibilities tomorrow, I'm not going to have the time to write up everything I wanted to say about Joe Frazier, who died tonight of liver cancer. However, I wanted to implore the people who may otherwise not pay attention to the coverage about his life to pay attention to his relationship with Muhammad Ali.

I'm not sure I've ever written here about my deep affinity for The Greatest, but suffice it to say that there was not an athlete I admired more than Muhammad Ali--even though all of his meaningful fights happened before I was born. But Joe Frazier's legacy will always be told in tandem with his professional and, more to the point here, personal fights with Ali. And despite my profound admiration for Ali as a fighter and as a man, Ali's treatment of Frazier was utterly disgraceful.

Ali was a young, brash, anti-authoritarian man of great pride and braggadocio. Ultimately, I think his overabundance of confidence was one of his greatest strengths--of which there were many. But he went too far with Frazier--humiliating him and calling him a Tom and Gorilla, among many other awful things. I understand that Ali was trying to get into Frazier's head, but whatever line there is between trash talk and humiliation, Ali crossed it repeatedly with the exuberance and glee of a bully. 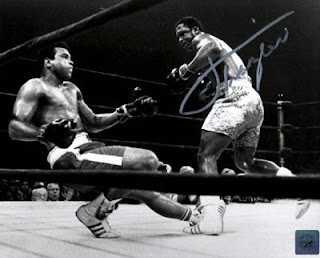 Their relationship was important to note because, much more than it was with Sonny Liston, the Ali-Frazier feud was used as a metaphor to describe the social turmoil among blacks emerging from the Civil Rights Era: was our identity to be one of patriotism and patience (Frazier)? Or was it to be of proud, unyielding defiance of authority (Ali)?  Of course, we all forge our own identities as individuals, and fittingly, these two men surpassed the narrative arcs assigned to them to become the more complicated sports icons and historical figures we acknowledge today.

In time, Ali apologized for what he said and did over the course of their intertwined careers. I read recently that Joe had publicly forgiven him--which is a testament to the kind of man Joe Frazier was. No man should take the verbal abuse and humiliation he took from Ali--and Joe Frazier was so much the better man for that forgiveness. 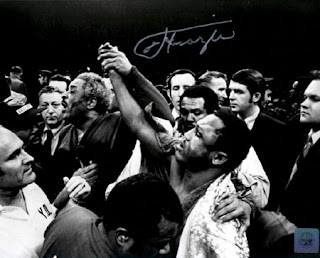 UPDATE: A few people flagged an article on Twitter. Following the Thrilla in Manila, this was filed on deadline at Sports Illustrated. This is what sports journalism should look like.