On the London Riots

Just before this writing, the riots in London and other parts of Great Britain were well into their third night. And the video that is coming out of them is jarring, if not altogether shocking. Several outlets and writers are contributing their two cents. My former colleague Jesse Walker highlighted an editorial from UK's Guardian, which puts the current riots in context:


There is, though, an important difference between 1981 and 2011. Thirty years ago, Lord Scarman's landmark report concluded that the Brixton riots were "essentially an outburst of anger and resentment by young black people against the police". The evidence for that conclusion was overwhelming. Thirty years ago, London's police had provided repeated provocation for concern and anger. Much policing of that era was too aggressive, too high-handed, based on crude and often racist stereotypes, and lacked any convincing accountability, either strategically or for individual abuses.

It would be reckless to pretend that the latest riots owe nothing to bad policing as well as bad people. The circumstances of the shooting of Mark Duggan in Tottenham, the official response (or lack of it) to a protest against his killing, and the local backdrop to these events, must be fully examined before a final judgment is made. Moreover, police use of guns will always run the risk of lethal abuse. But it is also clear that there have been major changes, almost all of them for the better, in the policing of London and of black communities, in the years since Scarman. Police training, behaviour, leadership, methods and accountability have all been qualitatively improved. Tottenham is also an improved place in countless ways. (links in original, emphasis mine)

And my friend Ned Resnikoff highlighted this blog post by Penny Red, (which you should read in its entirety, btw):


In the scramble to comprehend the riots, every single commentator has opened with a ritual condemnation of the violence, as if it were in any doubt that arson, muggings and lootings are ugly occurrences. That much should be obvious to anyone who is watching Croydon burn down on the BBC right now. David Lammy, MP for Tottenham, called the disorder 'mindless, mindless'. Nick Clegg denounced it as 'needless, opportunistic theft and violence'. Speaking from his Tuscan holiday villa, Prime Minister David Cameron – who has finally decided to return home to take charge - declared simply that the social unrest searing through the poorest boroughs in the country was "utterly unacceptable." The violence on the streets is being dismissed as ‘pure criminality,’ as the work of a ‘violent minority’, as ‘opportunism.’ This is madly insufficient. It is no way to talk about viral civil unrest. Angry young people with nothing to do and little to lose are turning on their own communities, and they cannot be stopped, and they know it. Tonight, in one of the greatest cities in the world, society is ripping itself apart.

Violence is rarely mindless. The politics of a burning building, a smashed-in shop or a young man shot by police may be obscured even to those who lit the rags or fired the gun, but the politics are there. Unquestionably there is far, far more to these riots than the death of Mark Duggan, whose shooting sparked off the unrest on Saturday, when two police cars were set alight after a five-hour vigil at Tottenham police station. A peaceful protest over the death of a man at police hands, in a community where locals have been given every reason to mistrust the forces of law and order, is one sort of political statement. Raiding shops for technology and trainers that cost ten times as much as the benefits you’re no longer entitled to is another. A co-ordinated, viral wave of civil unrest across the poorest boroughs of Britain, with young people coming from across the capital and the country to battle the police, is another.  (Emphasis mine)

Now, the problem I have with both pieces -- again, which are both worth reading, especially the blog post -- is the wrongheaded, yet understandable desire to make sense of it all. That somehow, some way, we must be able to put blame on someone, something, some wrong deed that caused the catastrophe to happen; that there is something preventable that we can guard against in the future. Perhaps there is, but even if that were so, it doesn't really explain the violence.

There can be catalysts to violence, and maybe the beginning of the violence had been fueled by righteous rage. But reading anything but dumb, horrible, senseless angst and anger into that violence is fruitless.

I am old enough to remember the Rodney King verdict, and I remember the aftermath. I remember how angry I was--I even threw something across the room, breaking it and denting the entertainment center, and screaming at the television, "How COULD they?!?!?"

I understand violent anger, believe me.

It takes more than an outburst of raw emotion to sustain the devastation of days-long riots, and any political force that may have sparked them will have long-been subsumed into the incoherent havoc that is mob violence. Whatever real problems that exist in the affected communities don't explain the violence any more than the relative peace in the affected areas was indicative of a hunky-dory system til Friday.

In short, there is no more reason to a riot than there is to a lynching. There are causes, there is wanton violence, and there is no shortage of blame after-the-fact. There is a trigger that almost everyone can agree on, and then there is carnage. There really isn't much more to them than that. 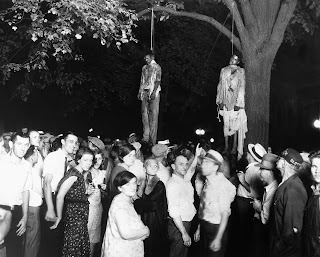 Pace Ms. Red, violence is the epitome of mindlessness. Treating riots as anything else elevates them to a level of political significance that they do not deserve.

bellum medicamenti delenda est
Posted by JPB at 1:49 AM