Obama's "Plan" and All Its Hollow Glory

Since the NYT put up its paywall, I've been avoiding the site pretty steadily. But someone tweeted this handy little chart explaining the differences in the President's anti-Paul Ryan budget plan.(click to enlarge) 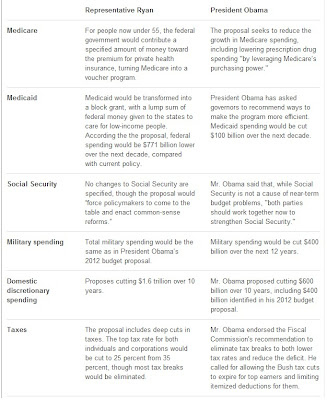 I'll leave it to the Left to demolish Ryan's plan, as they have already on so many occasions. Let's look at this new plan that so many were defending on Twitter today.

Translation: 'Leveraging Medicare's purchasing power' is a nice way to say "extortion." When you have a virtual monopoly on medical care for the elderly--a class dependent on drugs--the monopolistic power of Medicare is a blunt tool with which to extort favorable prices from drug companies. These "savings," of course, will be paid for by younger folks who see their over the counter or chronic ailment medicine increase in price to make up for the lost revenue. We have antitrust laws, in theory, to protect consumers from monopolistic practices and price fixing. Of course, when the government does it, it's just fine. In fairness, this "negotiating" with drug companies isn't anything new, it's just going to be accelerated and amplified because of Bush's Prescription Drug Benefit.

Medicaid: "President Obama has asked governors to recommend ways to make the program more efficient. Medicaid spending would be cut $100 billion over the next decade."

Translation: I hope to cut $100 billion, but will let the governor's do the dirty work because I want to shirk responsibility if things go wrong but will happily take credit if all goes well. (cf. "Clinton's" twice-vetoed Welfare Reform of 1994)

Military: "Military spending would be cut $400 billion over the next 12 years."

Translation: I'll make symbolic cuts to maintain the entitlement programs that are actually bankrupting us.

Taxes: "Mr. Obama endorsed the Fiscal Commission's recommendation to eliminate tax breaks to both lower tax rates and reduce the deficit. He called for allowing the Bush tax cuts to expire for top earners and limiting itemized deductions for them."

Translation: We've shown we can't spend your money responsibly, so we're going to need more of it. Also, the rest of my budget commission bummed me out, so we're just gonna table the rest of that noise.

Again, Ryan's plan has its own shortcomings, but I don't know how much of the 'Twitter base' it rallied on the Right. But to believe this "plan" is anything but obfuscatory rhetoric is just delusional.

*If he's serious about making Defense cuts, great. But he's shown nothing to indicate that he is, indeed there is much more evidence to the contrary, so I won't treat it like it is.
Posted by JPB at 5:54 PM