And a Silver Star for Prison Nurseries!

There is just so much wrong with this Northern Ohio editorial about a report on incarcerated women:


The report, released Thursday by the National Women's Law Center and the Rebecca Project for Human Rights, analyzes policies in three areas — prenatal care, shackling of pregnant women during childbirth, and community-based alternatives to incarceration enabling mothers to be with their children.

Only one state, Pennsylvania, received an A. Ohio received a C, scoring a D in prenatal care, a D in shackling policies and an A in community-based alternatives. Ohio also earned a B for its prison nurseries.

Let's put aside the awfulness of reading a sentence that "also" gives a letter grade to a prison nursery system and discuss the "alternatives to incarceration." Here's an alternative: let's try eliminating mandatory minimums:


As a backdrop to its findings, the report noted the number of women in prison — more than 115,000 as of 2009 — has risen at a higher rate than that of men since the introduction of mandatory sentencing policies for many drug offenses. It said most of the women are nonviolent, first-time offenders, and about two-thirds have at least one child under 18. (emphasis mine)

Put two and two together: legislative overreach into the judicial branch has authorized the government to put shackles on non-violent first-time offenders giving birth to children. In what bizarro world is this considered humane? What kind of society does this to a woman?

Well, the News-Herald has an original idea to prevent these situations: Just say "no":


While we support greater accountability and consistency, and while we don't feel women should be shackled to the extent they suffer lasting hip and back injuries while giving birth, as an Arkansas women alleges in a lawsuit, we feel the better way for mothers to avoid these problems is simply to stay out of prison in the first place.

Certainly a pregnant woman's health — and the health of her child — should be accounted for, but ultimately, incarcerated mothers are in the situation they're in because they committed a crime — for which they knew there would be consequences. (emphases added; smug contempt for justice in original.)

Shorter News-Herald: Well, so long as the shackles allow certain leeway so as to prevent injury, we see nothing wrong with treating a woman giving birth with less respect than we would give an animal in a zoo.

The 'crime ergo punishment' argument is as weak as it is tired. Yes, if you commit a crime, you can expect punishment if caught. This does not mean that any and all punishments are acceptable for any given crime. 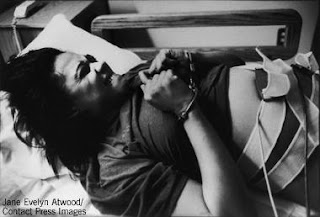 Photo courtesy of Jane Evelyn Atwood; used without permission.
That someone is labeled a "convict" or a "criminal" is not license to treat them inhumanely. This is even more true for those who have violated laws that are themselves unjust--as most of our drug laws and sentencing laws are.

This is awful and just makes my blood boil... I have never heard of such a thing as shackling women during childbirth!! Why not just lock the door if you don't want them to leave! And why would they leave with blood and baby dripping out of their downstairs?! That's the craziest thing I've ever heard of!!!

I could *maybe* be OK with that happening to a Hannibal Lecter kind of crime, but for simple drug offenses? Their babies are probably going to be removed from their arms and placed in foster care... isn't that punishment enough?!