Somebody Somewhere Loves My Sports Teams 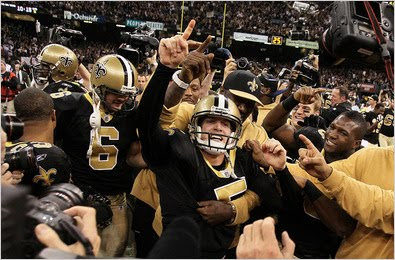 I don't know what sports god I pleased, but the Yankees winning the World Series followed up by my two
favorite teams in the Super Bowl has made my sports year. Of course, it would be nice if Notre Dame football and IU Basketball were on top too, but perhaps you didn't catch that last part--


THE NEW ORLEANS SAINTS ARE GOING TO THE SUPER BOWL.

People were always sort of curious as to how a kid from Indiana became a Saints fan. I'd usually tell them a story about my love of Buddy Ryan's 46 Defense--made famous by the '85 Bears--and how his subsequent coaching stints after he left Chicago left me without a team to root for.

Then I found the Dome Patrol--the Saints' sack-happy linebacking corps of the late '80s and early '90s. Pat Swilling and Rickey Jackson stuck out in my mind the most, but most people who haven't followed football as long as I have--or knew anyone on the Saints in pre-Brees era--didn't know what the hell I was talking about. They just assume that the Saints were always terrible--and they never had anything to be proud of.

I had never thought that they actually had a wikipedia page, but, in fact, they do. So, for all those people who are just this season discovering the Saints--I can simply point to this lovely little page passed on to me by my former colleague and fellow Saints fan, Jamie Plummer.