Pop quiz:
Which of the following are legitimate qualifications for a position on the Supreme Court:

a) a born-into tan
b) a cool "ethnic" last name
c) boobs/who-ha
d) legal acumen
e) all of the above, with special emphasis on a, b, and c
While put so crudely as to garner disgust from the Left, any astute non-comatose observer of the nomination process leading up to today's announcement can say, without reservation, the answer the Obama administration would give is "e." As proud as I was of my country for electing a black man--among a field of white men (and woman)--to be POTUS, I am disgusted by the manner with which the administration made its selection for the next Supreme Court justice.

The nomination of Second Circuit judge Sonia Sotomayor is an exercise in racial and gender pandering. This nomination should make her the new face of Affirmative Action: someone who may or may not be qualified for a position but gets in on an Affirmative Action "twofer." The administration made no secret that they were looking for a woman and/or Hispanic--arrogantly walking all over the letter and spirit of the 14th Amendment's Equal Protection Clause. Either we, as minorities, are equal or we are not--searching for the best among a gender/class/race is to degrade the equality so many fought for and intimates that if a given token nominee were to be judged against a truly open field, they would fall short.

It is not without a heaping spoonful of bitter irony that Sotomayor's record is, by most accounts, relatively unremarkable save for an Affirmative Action case now being considered by the Supreme Court--Ricci v. DeStefano.* The case illustrates what is wrong with Affirmative Action and the mindset of those who implement it: the results of a race-neutral test for promotion within a fire department were thrown out, thus preventing all promotions, because not enough blacks passed the exam. The city was afraid of being sued, thus they blocked all promotions. How this amounts to justice--genuine or "social"--has yet to be rationally explained, to my satisfaction at any rate. (Feel free to attempt in the comments.) The would-be Ms. Justice Sotomayor sided with the city, blocking justly earned promotions in the name of racial something or other.

I fail to see how selecting someone for their race/gender/ethnicity is substantively different than picking only among old white men. If to do the latter is racist and/or sexist, so is the former. Simply changing the race/gender of the selected does not make it any less unfair nor does it give the decision some sort of made-up nobility. To do so is not just logically inconsistent, it is simply wrong.

I suppose that the administration was open about its happenstance favoritism should mean something, excepting the fact that this patent tokenism is being hailed as some sort of milestone for Hispanics. Unless Hispanic women read differently than everyone else, unless laws apply to them differently than everyone else, and unless there is a fundamental legal reason that a Hispanic woman should be on the Supreme Court, to delimit the selection process to exclude or severely hamper the chances of any gender or race--or a certain combination of the two--is overtly racist/sexist and anyone who argues differently is not to be taken seriously. (Notice, too, there were no black men on the shortlist. I guess we made our quota.)

If the "shortlist" candidates could hold their own against white men--and all indicators show that most of them could--there is no legitimate reason to exclude them. To do so cheapens the nomination and everyone associated with it. I don't know enough about Judge Sotomayor to say definitively one way or the other if she is qualified for the Supreme Court. However, when all signs pointed to "woman and/or Hispanic" immediately after Justice Souter's announcement--instead of "Judge Sotomayor leads the field of jurists and professionals due to her accomplishments/decisions/writings/unusually high esteem, etc."--I find it sickening that most people just took it as given that giving any job, let alone THIS job, on qualifications of happenstance--gender and race--is in any way acceptable.

While it should go without saying, the traditional counter-argument is "It's not that we're giving a job to someone strictly because they are Hispanic/a woman, but among qualified candidates..." Yeah yeah yeah. Well, a lot of white men were given jobs over as or more qualified blacks/women and were not given their positions strictly because of their race and gender either. Inexplicably, it makes all the difference in the world that excluding all but white males is morally reprehensible yet excluding those white and male is morally praiseworthy and cause for celebration.

Maybe with her swearing-in, we could get Judge Sotomayor fitted with a robe with a big shiny letter "T" on the front: 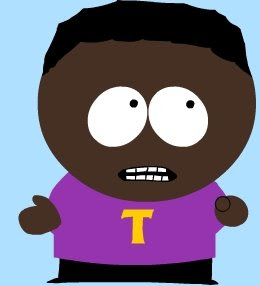 It isn't that she's not good enough--she very well may be eminently qualified. But the way in which she was selected inevitably casts a shadow on her nomination. Justice Thomas complains openly--and in his legal opinions--about Affirmative Action, yet so many of his critics point to it as the main, if not only, explanation he's on the Court himself. The fact that he's the most Constitutionally consistent justice on the Court doesn't seem to enter into it--what must be a particularly harsh smack in the face to a proud man who has endured as much as he has. (And I'm not denying his race wasn't a huge factor in his selection, but the fact that people use it against him only strengthens my argument that it taints the accomplishment.)

Judge Sotomayor should have been considered against a full field of candidates--not just those whose biological and ethnic traits met political qualifications that have no bearing on their jurisprudence.

*Full disclosure: My employer filed an amicus brief on behalf of the firefighters in the case.
Posted by JPB at 5:46 PM

What do you think of Glenn Greenwald's comments on this subject?

I think he, as a liberal, is happy with the pick because she will most likely be more in line with his general worldview than not.

But the thrust of his (and in one of his updates Dahlia Lithwick's) comments are defending her against character smears and baseless, tasteless accusations of her own racial preference history, and the like. I think that both Greenwald and Lithwick are justified in defending her to that end.

I made a point not to criticize Sotomayor's ability/worthiness of the nomination. I know enough that I'm probably not going to agree with her on a lot of issues, but that really isn't the point. I would have gotten into the cases she's decided (other than Ricci) if I were making some sort of character or jurisprudential assessment of her abilities.

It's the nomination process, not the nominee, that bothers me about this. I expected a liberal, and it seems they found one. (It's not as if I thought they were going to nominate Doug Ginsburg or Janice Rogers Brown.) I just thought/hoped they'd have more respect for the process and nominee than to limit the selections to some pet constituencies so blatantly, to the exclusion of others.

I abhor racism, sexism, and arbitrary exclusion on principle. But on the Left, as with the Right, principle more often than not takes a backseat to politics.

The irony that this is hailed as a step forward for racial equality would be laughable if it were not so grossly misplaced.