Not surprisingly, people have been asking me what I did to celebrate the inauguration of President Barack Obama. Ok, I'll tell you:

I sat at home, had a couple beers, and watched it on TV.

Invariably, some of my more sentimental friends and family will be terribly disappointed by my perceived lack of enthusiasm for the moment. Indeed, I was surprised at my own muted response as I was watching the ceremony unfold, given my intensely emotional reaction to his victory speech in November.

My decision to stay at my residence in Virginia was due in no small part to the complexities of getting into the District in the first place. All of the bridges from Virginia into D.C. were closed to traffic by order of the Secret Service. After choking off the main arteries into the city, riding the Metro--which was already going to be a hassle--was nearly impossible, not even considering the limited parking spaces at the Metro stations to begin with.

But even had I lived in the city, without a seated view like the one shown below (courtesy of a facebook friend), I doubt I would have braved the crowds and cold: 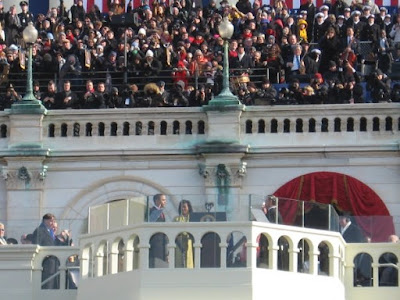 While I am one to harp on my friends who complain about D.C. cold, given my frigid (yet bearable) upbringing in Northern Indiana winters, I'm not one to stand about in cold if I don't have to. Add to this: my substantial but less-than-phobic antipathy toward large crowds; approximately 15 different channels on which I can watch the entire event from a proximity I couldn't possibly hope to achieve in person; and food, heat, and beer, I couldn't possibly will myself to get up hours before dawn to make it there to stand crammed together with strangers from a vantage point far inferior and infinitely less comfortable than my La-Z-Boy (that, incidentally, required passing through exactly ZERO invasive security checkpoints). After all, I doubt the older generations felt that they had to be on the surface of the Moon to appreciate the accomplishment of Armstrong, Aldrin, and Collins. Going through that much trouble just to see it on outdoor screens just wasn't worth it to me.

But all conditions aside, there was admittedly something quite different about this moment than the one in November. This was a scripted ceremony of precious little drama--as it is meant to be--and of nuanced character, rather than visceral excitement of a historic landslide victory. A moment like this is perhaps best judged from afar--taking in moments like President Obama sending off President Bush on Marine One; seeing the moving skill of Perlman, Ma, and company playing a composition of "Air" and "Simple Gifts", providing an equally beautiful instrumental contrast to Aretha Franklin's passionate My Country 'Tis of Thee; or that moment--that brief moment that is frozen in my memory--before he walked down the steps to take his Oath of Office, when the look on his face was unlike anything America had seen on the campaign trail or even at the victory speech in Chicago's Grant Park: that moment the enormity of what he had accomplished and the undertaking that required, visibly weighed on him.

This was not one of his practiced looks of concern, concentration, or introspection. There was an unmistakable air about him--just for that moment--that radiated an intense determination without a trace of arrogance; and with a stoic sobriety that showed no hint of being overwhelmed. The everpresent veil of the politician had been removed and Barack Obama, the man, was--for an instant--revealed.

I don't know if it was because, at that moment, I saw something sorely lacking these past eight years--but I don't ever remember seeing anything ever so truly dignified during any previous administration, or in any footage or photograph I have ever seen of a public figure. There have been moments of unintended honesty, sure--portraits of Lincoln and LBJ crumbling under the weight of the catastrophes of war; that moment of angry humiliation that flashed in Bill Clinton's eyes under cross-examination on the infamous videotape; or that image of sheer terror when W. was told about the attacks on September 11, 2001. All of these moments gave glimpses into the souls of these men. But Obama's first moment was something different--something Christopher Buckley compared to a statue--and something strangely reassuring.

I don't know if Obama will be a good president, and I don't pretend to read any indication of that from a few seconds of video. His policy preferences are, to me, unfortunate--but he is our president, and I hope he governs his administration well. I wish him nothing but the best for his sake, for the sake of the world, and for the sake of our country.
Posted by JPB at 5:11 PM