Today, I learned that Chris Buckley has left the National Review--the magazine founded by his late father and personal hero of mine, William F. Buckley, Jr. He left to quell the backlash for writing this -- and not even within the pages of the once great magazine turned hack-job rag. (Honestly, have you read The Corner recently?) It was a well-written piece by a man disaffected with a man he admires-- to the point that he does not want him to lead the country they both love. For this, and probably his libertarian leanings as well, his "resignation" was heartily accepted by Rich and Co.

I am absolutely fed up with the GOP.

I've been distancing myself from them for awhile now, but I'm just over it. The current Republican hierarchy--both within the party structure and the power players in the media-- remind me a lot of this guy: 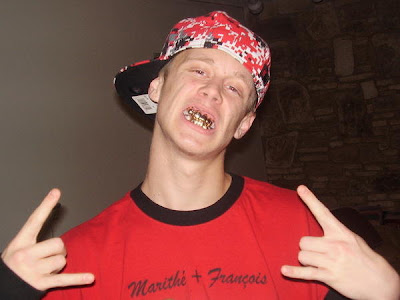 That is, so out of touch that they are in need of a serious and unrelenting ass-kicking.

As we recovering-Republicans watch the GOP sink like the H.M.S. Titanic--hubris and all--I can't help but feel that a certain amount of justice will be served as the defeats roll-in: precinct after precinct, office after office, state after state. The oncoming Blue Period will not be one that I relish at all--I will be as angry and vociferous in my opposition to their plans as I have always been. The pseudo-socialist nanny state types will deliver what they've been promising to do for years, and we shall all reap the rewards of the sown seeds of nearly unlimited executive power--this time, in the hands of a Progressive--backed by a Congress waiting to do his do-gooder bidding with money they don't have. (In fairness, Congress should be pushing their own similarly feel-good agenda, but the current leadership is entirely feckless and couldn't lead their way out of a paper bag.)

The Republican party thought it could throw out its philosophical groundings and that, somehow, they would stay in power.

Buckley summed it up well:

So, to paraphrase a real conservative, Ronald Reagan: I haven’t left the Republican Party. It left me.

Indeed it has left many of us, and the price shall be paid come November.