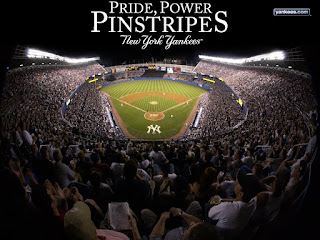 I am certainly among the minority of my friends insomuch as I hail from the Midwest and I am a Yankees fan. People ask why--most think it is because of their ridiculous run in the late 90s and that I, like so many of the people sporting the spankin' new blue hats with the red "B" emblazoned on their ignorant domes, was some sort of bandwagon jumper. Au contraire. Strat-o-matic baseball and Don Mattingly are to blame for this Indiana boy's love of the pinstripes. But I digress.

Anyway, so last night was our final farewell to the House that Ruth built 85 years ago. As a Yankees fan, there was certainly something missing as there is only a slim mathematical (i.e., no) chance of the Yankees making the playoffs this year. But, it was good to watch it anyway.

But for those of you who, like so many of my friends, are Yankee haters--envy, it seems, becomes most baseball fans--I found this little gem this morning over at Volokh:

Yankee Stadium, R.I.P. Today is, of course, the final game for “the Yankee Stadium,” as it used to be called, and the Sunday NY Times has a terrific 2-page spread with reminiscences of their “Stadium moments” by Paul Simon, Jill Abramson, Robert Creamer, Keith Olbermann, Michiko Kakutani, and several others. They’re quite moving. I’m a Brooklyn boy, and I was six years old when our Dodgers left town, never to return, and to say I never got over it is an understatement. I couldn’t root for them anymore, needless to say – damn you, Walter O’Malley, damn you to hell! – but at least we still had the Yankees . . . to continue to loathe and despise. It was a hard time to be a Yankee-loather – from 1957 to 1964, the Yankees of Mantle, Berra, Ford, et al. won 7 American League pennants in 8 years (though, blessedly, they only won the Series three times in that span). But in my candid moments, I have to concede: at least they were the kind of team worth hating. That was always the thing (and still is) about the Yankees; I guess there are people who “hate” the Atlanta Braves, or the Colorado Rockies, or the Houston Astros – but you can’t hate one of them like you can hate the Yankees, which is a purifying, soul-affirming, life-enhancing kind of hate.

I had the chance to see the Yankees at the Stadium twice this year. (both losses, but whatever.) The second time was with two of my best friends--one Cards and one Cubs fan--and even they got a little misty when they showed the video of Yankee Stadium highlights.

Love 'em. Hate 'em. You have to respect them.