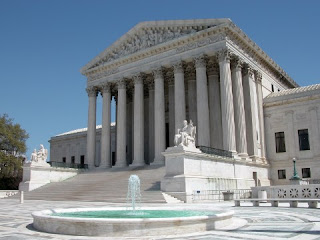 My first reaction listening to the oral arguments in the gun ban case is surprise. I am completely taken aback by the lack of focus on the part of Walter Dellinger, counsel for the District -- it was as if he didn't buy his own arguments.

When I listened to the oral arguments of the Boumediene case, I was certainly against the position of Solicitor General Paul Clement -- but he more than competently presented his position. Dellinger, on the other hand, seemed almost amateurish in his delivery, and certainly was not the impassioned advocate that Alan Gura was for Heller.

That said, it seems clear that Heller will be victorious on at least the most basic level. The problem will be how Roberts (I can only assume he will write the opinion, but it seems likely) tailors the exceptions. The Chief Justice has been an incrementalist and will probably not be as sweeping as, say, Scalia would be. So, we'll see where he draws the line and go from there.

Oral Argument audio can be found here (scroll down). Transcript here.
Posted by JPB at 3:45 PM